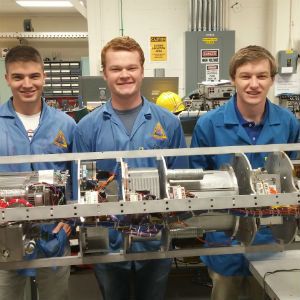 How would a 3-D printer work in the microgravity of suborbital space after surviving a jarring ride 100 miles above the earth? A group of Virginia Tech College of Engineering students hope to have an answer next week after a launch at NASA’s Wallops Flight Facility.

Ever the Hokies, the student designed, built and tested machine will 3-D print a plastic Virginia Tech “VT” logo. In space.

The experiment will fly aboard a 900-pound NASA two-stage Terrier-Improved Malemute suborbital sounding rocket, as part of the Colorado Space Grant Consortium’s national RockSat-X program that puts university-led experiments into suborbital space. Virginia Tech is one of seven universities to participate in the launch from Wallops Island, Virginia, set for 6 a.m. Tuesday, August 11. Backup launch dates are scheduled August 12 to 14.

The space agency will live Stream the launch at its UStream webpage.

The use of a 3-D printer in space is not new. A 3-D printer is on the International Space Station. But this will be the first time such a printer will be used on an unmanned rocket during flight, said Virginia Tech RockSat-X team leader Sebastian Welsh of Chadds Ford, Pennsylvania, and senior in the Department of Computer Science.

“We wanted to be the pioneers of that and get to be the first to tackle the problem,” said Welsh, adding that the “massive challenge” motivated the team, which includes 20 students from across the College of Engineering, all working with Virginia Tech’s Center for Space Science and Engineering Research, or Space@VT . Co-leading the team is John Mulvaney of Versailles, Kentucky, and a senior in the Department of Aerospace and Ocean Engineering.

“There’s a lot of practicality behind it,” said Welsh of the field of 3-D printing, also known as additive manufacturing. “In the future as 3-D printing develops, we see a lot of benefits to it such as parts replication and repairs in space, so for example if a part in space breaks on a mission to Mars or the ISS, it takes a lot of time and money to get new parts up to the astronauts, if it’s even possible at all, but if there’s a means to manufacture the part on board the spacecraft it would make repairs a lot easier and potentially help save missions.”

The student-led project started one year ago under the direction of Kevin Shinpaugh, an adjunct faculty member with aerospace and ocean engineering.

Shinpaugh, who has worked on several RockSat projects in the past, said this is the first experiment for launch at Wallops that has come from students rather than faculty. He added that the project falls in line with an initiative set by the Defense Advanced Research Projects Agency (DARPA, for short), to have astronauts in space build “new” satellites using “junk” parts from disused satellites, retrofitting the parts together with 3-D printed parts, versus creating entirely new spacecraft.

“In some ways, it’s a crazy idea, but in many ways, it’s groundbreaking,” said Shinpaugh.

The project comes with many challenges, said Welsh. The custom-built, mostly aluminum printer had to be less than 30 pounds, be compact, and take quite a beating – 20 to 40 g’s, that’s 20 to 40 times the normal force of gravity while reaching speeds of 3,800 miles per hour – of acceleration during the launch roughly 100 miles above the Earth.

The rocket will spend three minutes in microgravity, in which time the printer created by the students will use hot-melted plastic at 400 degrees to print its Hokie “VT” logo.

The printer already has been tested by NASA for durability, said Shinpaugh. NASA has what amounts to a massive version of a paint can shaker that you’d find at any home repair store for mixing paints. The device can mimic the violent shaking of a rocket launch.

In addition to printing, an onboard computer will record temperature, pressure, and acceleration data. Also, a HackHD camera will record the printer in action. Welsh and his team should be able to retrieve the printer and all data within seven hours of the launch and splashdown landing in the Atlantic Ocean.

“We plan to compare the object that was printed in microgravity to one that was printed here on Earth,” added Welsh. Microscopic analysis of the printed logo may show slight differences. After that, the group hopes to improve the printer and send it on a second flight, potentially with the ability to print multiple materials.

The team paid $24,000 to be manifested on the NASA mission, and the printer cost approximately $2,000 to build, using student-manufactured parts and off the shelf components such as belts and springs. Sponsoring the team were engineering company a.i. solutions, the Virginia Tech Department of Aerospace and Ocean Engineering, and the Student Engineers Council of Virginia Tech.