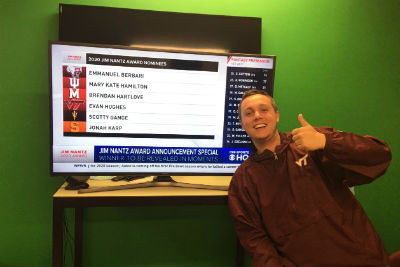 Evan Hughes learned he had placed second among collegiate broadcasters nationally during the STAA All-American ceremony on May 29. Photo courtesy of Evan Hughes.

Evan Hughes, a rising senior at Virginia Tech, has been named a Sportscasters Talent Agency of America All-American for 2020.

Not only is he the first Hokie to receive the honor, but he also placed second among collegiate broadcasters nationally.

“I’m delighted for Evan and proud that he’s the first STAA All-American from Virginia Tech,” said Bill Roth, the longtime and legendary Voice of the Hokies and a professor of practice in the Department of Communication. “Evan bought into our sports media and analytics program the minute he walked into our studios, and he has since put tremendous effort into growing as a journalist and communicator. He is developing into an outstanding young broadcaster and is a true leader among his peers, classmates, and colleagues.”

Founded in 2009, the All-America Program seeks to encourage collegiate sportscasters to strive for their best. The All-American status is reserved for those ranked among the top six in the annual competition. The top broadcaster of the year receives the Jim Nantz Award, named in honor of the award-winning CBS sports broadcaster.

Hughes has been a pioneer closer to home as well — as a member of the first class of Virginia Tech students to major in sports media and analytics. The program became eligible as a major just this academic year.

“The All-American honor is not only an incredible recognition for Evan, but also for our growing sports media and analytics program,” said Robert Denton, professor and head of the Department of Communication. “The program has grown from an option to a full academic major in just a few years. Led by Bill Roth, our faculty members have done an amazing job in developing a strong program with outstanding experiential learning opportunities for all majors. It is our goal to develop one of the premier sports media and analytics programs in the nation.”

In the 12-year history of the All-America award program, Hokies have finished in the top 20 only three previous times, with Danny Nokes placing 15th in 2015 and Bailey Angle placing 13th in both 2016 and 2017.

Nokes, who graduated with a communication studies degree in 2015, is now the producer and a co-host for Sports Radio 910 The Fan weekdays, as well as the host of the College Football Tailgate Show Saturdays during the college football season. He also provides select play-by-play for the Virginia Tech IMG Sports Network.

Angle, who graduated in 2017 with bachelor’s degrees in communication studies and history, is now a play-by-play broadcaster living in New Kent, Virginia. He currently serves as director of broadcasting at Bluefield College and works as a freelance broadcaster for the ACC Network at Virginia Tech.

Hughes said he’s thrilled to be part of the university’s growing legacy in sports journalism.

“I am so honored and grateful to represent Virginia Tech and our sports media and analytics program on the STAA All-American list,” he said. “My hope is that this will bring more recognition and awareness to high-school students around the country about our program and how Virginia Tech is one of the places to become a sports broadcaster or journalist.”

“I feel incredibly lucky,” Hughes said, “both to be part of this amazing program and to be a Hokie.”