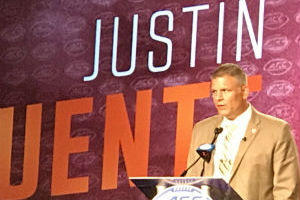 Justin Fuente will be back for a sixth year at Virginia Tech, AD Whit Babcock confirmed on Tuesday.

There had been speculation building for weeks that the school might part ways with the coach, whose teams have compiled a 43-32 record in his five seasons, but have had losing records in two of the last three years, including a 5-6 record in 2020.

Babcock, who hired Fuente to replace legendary Tech coach Frank Beamer in 2015, said today that he met with Fuente for four hours on Monday to review recruiting, the depth chart, staff and community outreach, and that he “saw and heard what I wanted to see, and it energized me.”

The AD also said the decision to retain Fuente wasn’t financially related – though the athletics program at Tech announced two weeks ago that it had been forced to undertake cost-saving measures to account for a projected $15 million budget shortfall resulting from the impact of COVID-19.

“Yes, we are in a bind financially, yes there’s buyouts, but we were determined to make the right decision either way because I cannot imagine a working relationship that you have somebody around that you don’t believe in that you just keep for money,” Babcock said. “You can lose or risk money no matter which way you go, so make the right decision, and the rest will take care of itself. ”