Museums have a captive audience in visitors who typically meander through static exhibits depicting various scenes of cultural and natural history. But in the new digital age, the museum audience is increasingly digitally savvy and accustomed to learning through interactive games and other forms of digital media. 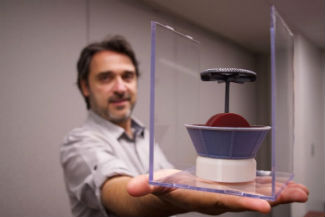 A Virginia Tech researcher is helping to bridge the digital gaps that visitors experience in museums by studying virtual spaces that could serve to make institutions more interactive, social, and gamelike — and hopefully more appealing — to 21st century audiences.

Panagiotis Apostolellis, an adjunct professor in the Department of Computer Science in Virginia Tech’s College of Engineering, and a team of researchers assessed the ability of museums to provide young visitors with an enjoyable and augmented learning experience by harnessing the educational value of virtual environments and computer games for a large audience.

“Virtual environments have been used extensively for unguided, discovery-based learning in either individual or distributed educational settings where learning does not occur in one central location,” said Apostolellis. “Our main objective was to test their effectiveness in supporting learning and sustaining engagement of small and large collocated student groups, especially in the context of informal learning settings like museums.”

The test environment that Apostolellis and his team used was a virtual olive oil production factory from the 1920s, a setting that would be very familiar to students in Greece — a top olive-oil producing country — and conversely less so to students in the United States, the two locations where the study took place. Using these distinct groups gave the researchers the ability to measure engagement and learning across cultures using subsets that had little experience with the topic versus those that had a large amount of familiarity.

Apostolellis dubbed the virtual environment of the simulation 3-D game C-OLIVE: Collaboration Orchestrated Learning in Virtual Environments. C-OLIVE matched the goal and process of the game with specific learning outcomes, such as being able to replicate the olive oil production process.

Visitors to the museum exhibits and more than 800 students who played the game in public and private schools and summer camps in both Greece and the United States experienced the olive oil production process of a steam powered manufacturing factory of the 1920s using interactive game controllers.

Apostolellis and his team’s research primarily centered on the concept of orchestrated learning, a type of learning that occurs through intentional coordination (facilitated or not) of collaborative activities within a virtual environment.

His research revealed that there is an association between the level of student collaboration supported by technology and learning, and also the game experience, especially when the process is facilitated by an expert guide. Additionally, the level of control in the game was a significant contributor to increased learning outcomes and sense of social presence — the feeling of interconnectedness with peers.

“Museums are increasingly becoming centers of community where visitors seek to have shared experiences around exhibits,” said Apostolellis. “There is growing evidence that game-based learning is fundamentally motivating to younger learners, so we thought that virtual learning environments in a museum would be an appropriate setting for middle to high-school students. This type of learning holds great potential to enrich the experience of large student groups visiting a museum.”

To really test his theory, Apostolellis partnered with the Franklin Institute in Philadelphia, one of the country’s most celebrated science museums, for the fourth and final study of the project. His goal was to exhibit the interactive game, informed by his previous three studies, in a real-world setting with groups of students visiting the space.

“Partnering with the Franklin Institute was key to the success of the study and a wonderful  opportunity for collaboration with a world-class museum,” said Apostolellis. “The museum hosts a large number of kids and we were able to take advantage of the foot traffic that came through, as well as compare a very urban student population with that of the population in Blacksburg and the island of Crete in Greece, which were significantly more rural.”

The exhibit at the Franklin Institute primarily featured an interactive game played on a large screen in which students were required to navigate the production process correctly, using a combination of Xbox controllers and iPads. In addition to the digital element, Apostolellis devised a board game with small 3-D printed replicas of the machinery and real production process artifacts used in the factory that visitors could engage with by placing them on a production timeline.

The activity served both as a way to solidify the information they acquired by playing the game, but also as an assessment tool for the researchers.

“What we found is that even though museums may not be 100 percent outfitted to perform optimally in a digital space, they can be retrofitted to engage large audiences in interactive learning experiences. In our studies, we had some variables such as level of interactivity, audience involvement, and grade level of students, but if kids from Philadelphia and Blacksburg can learn and accept concepts of olive oil production — a topic foreign to their cultural milieu — then I think we’ve proven that museums are not merely dusty repositories of artifacts, but can be living breathing entities where younger audiences can gather and find meaning by engaging in what speaks most to their hearts: social digital experiences,” Apostolellis said.

This research is supported by a Science, Engineering, Art, and Design grant from the Institute for Creativity, Arts, and Technology.

Apostolellis’ collaborative research at the Franklin Institute will be published in a special forthcoming issue of the Springer Series on Cultural Computing titled, “Museum Experience Design: Crowds, Ecosystems, and Novel Technologies.”