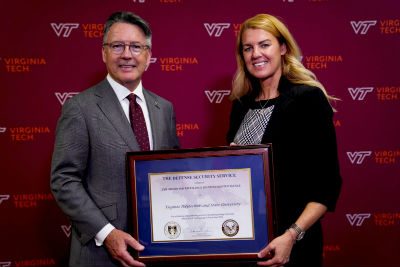 President Tim Sands (left) received the 2018 Award for Excellence in Counterintelligence for Virginia Tech. Carrie Wibben (right), deputy director for the Defense Counterintelligence and Security Agency, presented the award to the university on Aug. 19 in Blacksburg.

A federal agency has recognized Virginia Tech’s prominent role in the nation’s counterintelligence.

On Aug. 19, the Defense Counterintelligence and Security Agency, which is part of the U.S. Department of Defense, presented the 2018 Award for Excellence in Counterintelligence to the university. The award, given annually since 2010, recognizes up to four companies and/or institutions, out of about 10,000, that exhibit the best counterintelligence results and cooperation to support the U.S. government’s efforts to detect and stop foreign entities from stealing national security information.

The award, presented during an event at the Virginia Tech Corporate Research Center, recognizes the work of faculty, staff, and administrators across Virginia Tech who support restricted research, which imposes limitations on who can participate in research or restricts researchers from sharing information. Key to Virginia Tech’s work leading to this award is the Office of Export and Secure Research Compliance, which supports Virginia Tech’s commitment to comply with U.S. laws and regulations related to export and trade sanctions.

In May, a new applied research building opened in the Corporate Research Center, allowing the groups who excel in restricted research to work closer together and in collaboration with the Office of Export and Secure Research Compliance. The Hume Center for National Security and Technology, one of the main occupants of the new building, leads Virginia Tech in research and education programs focused on national challenges, including cybersecurity.

“We know that America’s research universities are a prime target from China, Russia, and other adversaries and competitors,” said Carrie Wibben, deputy director of the Defense Counterintelligence and Security Agency, during the presentation. “Virginia Tech truly is on the front lines.”

“With this amount of sensitive research, development, and education comes a very heavy responsibility to protect it,” she added. “This is something that Virginia Tech does exceptionally well through robust security and counterintelligence programs and through collaborations with DCSA and many other government partners.”

Wibben went on to describe ways that Virginia Tech has worked with the federal government to lead counterintelligence efforts and identify potential threats. In fiscal year 2018, the university submitted 81 reports of highly suspicious activity, which resulted in 77 intelligence information reports. All were related to foreign efforts to target the United States and university technology, she said.

“The government can’t alone protect our technology,” Wibben said. “Partnering between government, industry, and academia is critical to our national security.”

“It means a lot,” Sands said of the award. “Virginia Tech has a strong commitment to the counterintelligence community and its efforts to protect our assets.”

One of Virginia Tech’s goals through its counterintelligence efforts is to ensure that its own research is protected and that researchers’ work complies with laws and regulations. This work is fitting with the university’s land-grant mission, which is to be a useful engine for the commonwealth, the country, and the world, said Eric Patterson, interim executive director of the Hume Center, during the presentation.

“Virginia is the home of our country’s intelligence and defense,” he said. “If we were to ignore this, it would be foolish. Our students go to work at these places. Our alumni are there. They need us. They need the pipeline of talent, and they need the innovation and discovery that is being created here every day.”