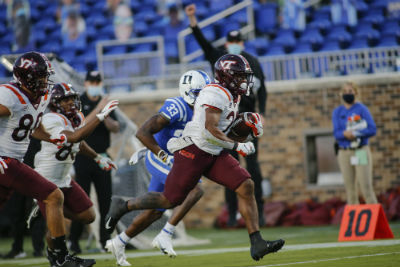 Khalil Herbert scores on a 60-yard run in the fourth quarter to put the game away for Virginia Tech. Photo courtesy Atlantic Coast Conference.

Duke led early on a Virginia Tech mistake, but the Hokies eventually took control in the fourth quarter, on their way to a 38-31 win on Saturday in Durham.

That would be the only time the Hokies (2-0) would trail on the day, though it would remain a game into the fourth quarter.

The Blue Devils (0-4) were unable to convert on the turnover, and Virginia Tech took back possession and extended the lead to 38-28 on a 60-yard rushing TD from Kansas transfer Khalil Herbert with 2:20 left.

Freshman kicker Charlie Ham closed out the scoring after he recorded a 39-yard field goal as time expired.

Tech QB Braxton Burmeister completed 9-of-24 pass attempts for 163 yards while also recording a touchdown and a pick in the win.