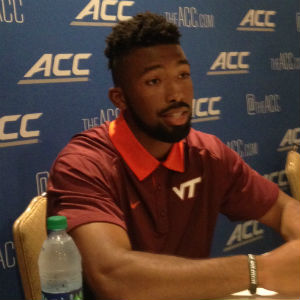 Fuller, a second-team All-America as a sophomore in 2014, missed Saturday’s 35-28 loss at East Carolina. Mike Goforth, the associate athletics director for sports medicine at Virginia Tech, said Wednesday that Fuller had suffered a torn meniscus in training camp in August and played the first three games of the 2015 season with the injury.

“After this past weekend’s game, it was decided that surgery would be the best option moving forward, and Kendall will miss the remainder of the 2015 football season. The procedure was performed Tuesday morning and Kendall is expected to have a full recovery,” Goforth said.

“Kendall was very determined to compete as long as he could with this injury,” Virginia Tech head coach Frank Beamer said. “While we are all disappointed that he is sidelined for the remainder of the season, we know Kendall will approach his rehab with a positive attitude and will continue to contribute to our team with his knowledge and leadership.”