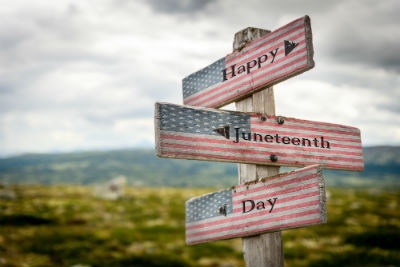 The messenger may have been murdered en route, or slave masters may have suppressed the news to ensure the harvesting of one more crop.

Theories abound as to why news of their freedom was withheld from enslaved people in Galveston, Texas, until two and a half years after the Emancipation Proclamation took effect and more than two months after the Civil War ended.

Juneteenth — a portmanteau of June 19, that day in 1865 when Galveston slaves finally learned of their freedom — became an annual day of celebration among African Americans in Texas. It has since expanded internationally as a day to recognize the end of slavery in the United States and to celebrate the culture and achievements of people of African descent.

To help commemorate the lifting of that final insult to the catastrophic and enduring injury of slavery, the Virginia Tech College of Liberal Arts and Human Sciences has launched the Juneteenth Scholars Program, an initiative aimed at exploring the role of the holiday in history.

“The Juneteenth Scholars Program recognizes the importance of understanding connections between the historic holiday and contemporary struggles,” said Laura Belmonte, dean of the college. “These critical challenges include institutional racism, the exposure of structural inequality, and support for vulnerable populations.”

Initiated in response to recent momentum in the Black Lives Matter movement, the program will support research by faculty members on topics such as emancipatory movements, structures of oppression, institutional silence about violence, the courage of activists, and the need for systemic structural change in the United States and globally.

The inaugural class of Juneteenth Scholars include faculty members from a range of disciplines in the college:

These scholars will receive funding for research conducted between July 1 to August 10 of this year, along with support for an undergraduate researcher. The faculty scholars and the students will be invited to present their research at a college forum during the next academic year.

“We are hoping to make the Juneteenth Scholars Program a permanent form of faculty support in the college and at Virginia Tech,” Belmonte said. “Humanity is at the core of the work in our college, and notions of justice are woven into the fabric of so much of our research. The program is also reflective of the college’s larger commitment to early-career faculty on the path to promotion and tenure.”

For their part, the founding Juneteenth Scholars have long explored the issues the holiday represents.

“Although my community observed Juneteenth each year, we knew it as Black Liberation Day,” Faulkner wrote in her program application. “It was less a celebration and more a call to action. Our community leaders emphasized the ongoing struggle for equality and explicitly condemned the racism and poverty that deeply affected everyone around us.”

One hundred and fifty-five years after the Galveston slaves learned of their freedom, Faulkner added, liberation goals have not been fully achieved, and much more work needs to be done.

At the same time, Faulkner wrote, Juneteenth is more than a commemoration of physical freedom: “It is also a recognition of our progress, our resilience, and our commitment to fighting against all forms of oppression.”