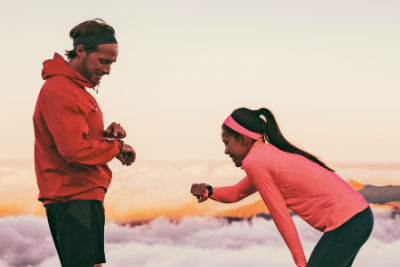 Sweating is a natural function of the human body, allowing a body to cool itself as sweat emerges from glands and evaporates.

Separately, this process may produce odors as bacteria present on the skin break down sweat proteins. A deodorant kills the bacteria that produce the odor, while an antiperspirant clogs sweat ducts to prevent sweat from emerging in the first place.

This clogging is commonly achieved by the use of metallic salts. There remains debate as to whether or not these metallic salts contribute to heath risks, such as cancer, but demand by consumers for more natural alternatives to antiperspirants containing these metals (a sort of “just-in-case” scenario) is rapidly growing.

The Virginia Tech Nature-Inspired Fluids and Interfaces Lab, led by Associate Profesor Jonathan Boreyko, has just made a major breakthrough in the study of natural antiperspirants. Their theory is this: If the sweat can begin to evaporate while still inside of the sweat duct, before it emerges onto the skin, the sweat’s own minerals will crystallize to clog the duct. In other words, the mixture of sodium, choride, potassium, calcium, urea, and bicarbonates naturally present in sweat can do the same work as the metallic salts used in commercial antiperspirants.

To explore this idea, the group constructed an artificial “sweat rig” to investigate the possibilities. They used a microchannel made from pulled glass to serve as an artificial sweat duct and created the function of a sweat gland by using pressurized gas to push synthetic sweat across tubing and into the connected glass duct.

Video of formation of a seal by synthetic sweat and deyhdration: youtu.be/w2uo-kCbGjY

To prove the concept, three different scenarios were tested. The first was a control, where no product was placed near the artificial sweat duct. For the second test, researchers placed a dry cube of the organic, silicon-based polymer PDMS near the exit of the duct. Finally, for the third test, the PDMS cube was infused with propylene glycol, a chemical that is highly attractive to water. These three scenarios allowed for a direct comparison of how sweat flowed when the duct was completely open, versus near a regular object, versus near an evaporation-inducing object.

The team observed the flow of the synthetic sweat, which has the same minerals as natural sweat, by focusing a microscope on the artificial duct. For the first two scenarios, the sweat flowed freely from the outlet of the sweat duct, which would correspond to sweat emerging onto the skin. But for the third scenario, where the duct was placed close to the evaporation-inducing material, the duct became clogged within seconds. A gel-like plug formed within the duct near the exit, creating a seal. Even when the pressure pushing the liquid was increased, the clog was able to maintain the seal.

“Over the past few years in particular, I’ve noticed that my wife and many of her friends have been transitioning to more natural cosmetic and cleaning products,” said Boreyko. “There is also an increasing push from regulatory agencies, particularly in Europe, to restrict the use of metals in antiperspirants. Our research has discovered the most natural antiperspirant in existence: the minerals within the sweat itself! It is exciting to find that simply making the sweat evaporate faster can cause natural mineral plugs that have the potential of replacing metal-based products in the future.”

With the concept proven, the team is moving toward application. Possibilities for extending the concept to human trials could include using an applicator stick, similar in form to current products, or a wearable adhesive. In either case, the next goal is to demonstrate in a human trial that the proper water-attracting product could facilitate natural clogging from the body’s own sweat.

Findings from this research were published in the journal ACS Applied Materials & Interfaces on Nov. 16, 2020.