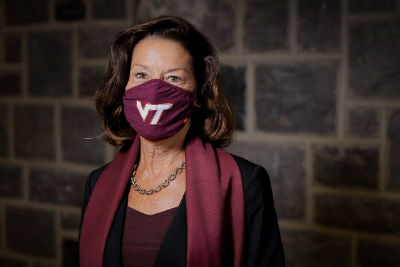 Elizabeth McClanahan, a former justice on the Supreme Court of Virginia who now serves as president and dean of the Appalachian School of Law, has been named CEO of the Virginia Tech Foundation.

The foundation manages the university’s endowment, has an extensive real estate portfolio, and encourages economic development by fostering connections between Virginia Tech and numerous partners.

McClanahan has served as an adjunct professor of finance and senior advisor to the dean in Virginia Tech’s Pamplin College of Business since September 2019, but her ties to the university go back much further.

“Virginia Tech played a formative role in my life,” McClanahan said. “My mother hosted Extension homemaker clubs when I was a young child. I joined 4-H at age 9 and in my teenage years attended 4-H Congress on campus. Virginia Tech is now a global university and world leader in higher education. Joining the foundation is the opportunity of a lifetime — especially at a time when Tech’s energy, innovation, and trajectory are unmatched.”

McClanahan will become foundation CEO on June 1, 2021, succeeding John Dooley, who in August announced he would retire. The foundation CEO is a member of the Virginia Tech President’s Cabinet.

“The foundation is deeply involved in realizing the university’s mission and vision,” Virginia Tech President Tim Sands said. “Elizabeth brings a wealth of experiences in law, leadership, and higher education, and I look forward to working closely with her on our key strategic initiatives and partnerships.”

McClanahan has served as the Williamson Fellow at the College of William and Mary Law School and taught at the Wake Forest School of Business and Accountancy. She has chaired the State Council of Higher Education for Virginia and has also served on the Board of Visitors for the College of William and Mary as vice-rector and the Board of Trustees for Emory & Henry College.

“The network of relationships that Elizabeth has built over her impressive career will serve the foundation and the university very well,” said Dwayne Pinkney, the university’s senior vice president and chief business officer, who co-chaired the search committee for the foundation CEO position. “This position is an important connection between the university and many of its constituencies.”

Former Virginia Tech Foundation Board Chair Sandra Davis, who co-chaired the search committee with Pinkney, said she was “excited by the talent Elizabeth brings to this role that is so vital for the foundation and the university. I think the transition will be positive, continuing the success of current goals, while providing strong leadership on future developments and opportunities, including growing the endowment.”

Along with many other projects, the foundation is deeply involved in the university’s new Innovation Campus in the greater Washington, D.C., metro area; the university’s growing presence in Roanoke; and what will become the tallest building in downtown Blacksburg.

“Elizabeth will arrive at a pivotal time, and her leadership will play a major role in our ability to deliver on key initiatives and build on the momentum they bring to accomplish even more in the future,” said Hance West, the foundation board’s current chair. “I look forward to working with her to extend the impact our university can make.”

McClanahan earned her bachelor’s degree from the College of William and Mary and her law degree from the University of Dayton School of Law. She is admitted to the bar in Virginia, Maryland, West Virginia, and Washington, D.C. Her law career includes having served as a shareholder and director at Penn, Stuart, & Eskridge; being chief deputy attorney general for Virginia; and serving as a Virginia Court of Appeals judge before joining the Supreme Court of Virginia.

Dooley, the outgoing foundation CEO, plans to help McClanahan transition into her new position. Years ago, he was executive director of the Virginia 4-H Foundation while she was a member of its board.

“She really knows well the public-higher-education community in Virginia,” Dooley said. “She’s been in positions where she has seen the value that higher education brings to the economic vitality of the state, and I’m sure that will be of benefit as she assumes this role.”

McClanahan’s accomplishments as president of the Appalachian School of Law include establishing a partnership between the school, Ballad Health, and Pamplin College of Business on a project to combine health and legal services at a single point of care. Pamplin faculty experts will use analytics to track and measure the program’s success as part of their research. As president and dean, McClanahan also played a leading role in the Appalachian School of Law’s fundraising.

“The foundation is a crucial partner in our efforts to raise private support for Virginia Tech,” said Charlie Phlegar, the university’s vice president for advancement. “I look forward to working closely with Elizabeth as we engage our alumni and friends on behalf of our students, faculty, and programs. Elizabeth has been an enthusiastic champion for higher education in Virginia for many years. Her passion for what we do, and her strong personal and professional connections to Virginia Tech, really stand out.”

McClanahan, who has a daughter attending Virginia Tech, said she views higher education as “a way to improve the human condition through service, which is exactly what Virginia Tech’s Ut Prosim motto is and what the land-grant university mission is all about.”