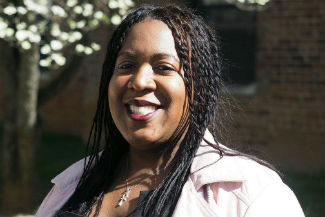 Donald Trump doesn’t even make overtures to African-American voters. But is it automatic that Joe Biden will get the support from black voters that conventional wisdom seems to suggest?

“Biden has expressed more empathy and at least has some connection to the broader culture of racism, but he did not mention the ways in which his own legislation while serving in the U.S. Senate helped contribute to this problem,” said Brandy Faulkner, assistant professor of political science and the Gloria D. Smith Professor of Africana Studies in the College of Liberal Arts and Human Sciences at Virginia Tech.

With a week of unrest across the nation since the murder of George Floyd, a black man who was killed by a white police officer in Minneapolis on Memorial Day, people are looking to leaders for answers.

“It’s simple — we need a sincere acknowledgement of the injustices black people face in law enforcement and in the criminal justice system as well as a plan to address them. Neither presidential candidate has moved completely in that direction,” Faulkner said.

“The history of state violence against black men and women is well-documented, and the community has pleaded with politicians to pay attention. Both candidates have made serious mistakes when dealing with this issue, but for better or worse, more is expected of Biden,” Faulkner said.

Biden’s strength in the Democratic primaries was among African-American voters, who pushed him to a key victory in South Carolina that began the swing of momentum after Bernie Sanders had taken early control of the nomination process.

But Faulkner’s perspective is that he is taking his black voting base for granted.

“The symbolism associated with Biden gives him a very strong base in the community, but, it’s also a base that he has not cultivated well,” Faulkner said. “Many in the black community had been waiting for someone like him to enter the race — someone from the old guard with name recognition and deep political ties. Someone relatively low-risk. He has done very little since then to reach out to black voters, and he should spend more time understanding the quality of life issues that the black community faces, not 30 years ago, but right now. And, he should adjust his policies accordingly.”

The election is still five months away, yes, but voters – particularly black voters – are not going to forget the death of Floyd and the events of the past week anytime soon.

“This topic has many implications for the black community and for the country as a whole. Candidates should not ignore it and expect to retain the support of black voters,” Faulkner said.