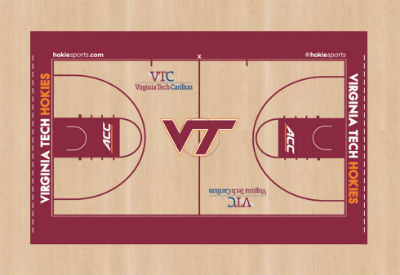 The floor at Cassell Coliseum has been renamed the Virginia Tech Carilion Court in recognition of a generous sponsorship of Virginia Tech athletics that will be used to fund scholarships and strategic initiatives, as well as to support public-health awareness.

“This naming reflects the growing partnership between Carilion Clinic and Virginia Tech, and the commitment our organizations both have to our region,” Virginia Tech President Timothy D. Sands said. “This public-private partnership can be seen in our Virginia Tech Carilion School of Medicine and Research Institute, and now it will be highlighted to even greater degree in the name of our most prominent court.”

Carilion was awarded naming privileges to the court for 10 years in recognition of a sponsorship that will provide $500,000 a year over that time. With the naming, Carilion will support student-athletes who are pursuing health careers, promote health awareness and the Carilion Clinic Children’s Hospital, and honor the importance of the Virginia Tech Carilion partnership, said Nancy Howell Agee, Carilion’s president and CEO.

”Improving the health and well-being of the communities we serve is our mission,” Agee said. “Together, Virginia Tech and Carilion are intentionally inventing the future and inspiring health. Our highly successful partnership, VTC, is developing needed physicians for the future, exponentially growing research to provide solutions these physicians will use to deliver on our mission and, importantly, proving to be a powerful economic engine for the region. VTC is a model of effective collaboration and holds tremendous opportunity for the future of our region.”

“Virginia Tech athletics and Carilion are committed to the continued wellness and good health of our friends and neighbors across the greater New River Valley and Roanoke region,” Virginia Tech Director of Athletics Whit Babcock said. “We hope the Hokies can inspire others to participate in sports, to stay active, and to get out and exercise. Participating in sports provides numerous benefits to our youth. I am a product of the student-athlete experience and I believe in all that it teaches, from youth sports through the college ranks. Carilion’s support will help us to do even more to promote healthy lifestyles on campus and in our community.”

Babcock said that Carilion’s support for scholarships and other initiatives, such as improving Cassell Coliseum, will help numerous programs, including men’s and women’s basketball, volleyball, and wrestling.

“Championship-level teams have to attract top student-athletes,” Babcock said. “We want to be the best in the ACC in all facets – that’s our goal. Scholarships and facilities are two very important keys to those objectives, and this partnership is another way to help the Hokies maintain a competitive edge. We are extremely proud of our partnership with Carilion. They are committed to the success and well-being of the Hokie Nation.”

Virginia Tech and Carilion have a history of collaboration focused on the well-being of the greater New River Valley and Roanoke region:

“The Virginia Tech Carilion partnership has been a powerful model, recognized across the commonwealth and the nation,” Johnson said. “We are delighted with the opportunity to continue solidifying our reputation for extraordinary health care and education.”

“The Virginia Tech Carilion partnership has already contributed substantially to major research discoveries that will improve the health of Virginians and people worldwide through improved diagnosis, treatment, and care for people with neuropsychiatric disorders, childhood developmental disorders, cancer, and heart disease,” Friedlander said. “These advances are leading to the development of new technologies. In addition. the Virginia Tech Carilion Partnership is already significantly boosting the region’s economy.”