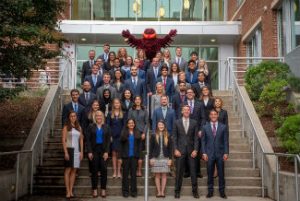 The Virginia Tech Carilion School of Medicine welcomed its ninth class on July 30, 2018. It is the first new class to arrive at the medical school since it became an official college of Virginia Tech on July 1.

The Virginia Tech Carilion School of Medicine welcomed its ninth class to be part of Virginia Tech’s ninth college in Roanoke, Virginia, on July 30. It is the first new class to join since the medical school became an official college of Virginia Tech on July 1.

In addition, the new Hokies will be part of Virginia Tech’s sesquicentennial class, as their graduation year in 2022 marks the university’s 150th year since its founding.

The medical school’s Class of 2022 has 43 members selected from almost 4,000 applications. They are almost evenly split between men and women with 22 men and 21 women.

“Once again, we continue to attract competitive students, who are not only academically qualified, but also have diverse backgrounds and experiences that lend well to our patient-centered, team-based curriculum,” said Cynda Ann Johnson, founding dean of the Virginia Tech Carilion School of Medicine.

Members of the class average more than 2,000 hours of research and more than 1,600 hours of clinical experience per person.

The class represents 11 states and 32 undergraduate institutions. Almost half – 20 – are Virginia residents.

The Virginia Tech Carilion School of Medicine received 3,972 total applications. From that, 312 participated in the school’s Multiple Mini Interview (MMI) process, held on seven Saturdays throughout the fall and winter months.

The VTC School of Medicine uses a hybrid MMI process, with applicants rotating through 10 interview stations. Nine of the stations have scenarios and one is a traditional interview.

In the scenario stations, the applicant reads a story, case, or ethical question on the door. When they enter the room, they discuss the scenario with the trained interviewer inside. The scenarios are designed to evaluate behavioral competencies such as communication, ethical and moral judgment, management, problem-solving, responsibility, and teamwork.

The MMI scenario interviewers represent a mix of backgrounds. Some are affiliated with the medical school, Carilion Clinic, and Virginia Tech, but many – 75 out of last year’s 117 active volunteer interviewers – have external roles in the surrounding community.

The school adopted the MMI to assess applicants’ abilities to function in team settings, which is important for VTCSOM students to thrive in the school’s small-group learning curriculum.

Every week through the first two years of study, students explore the experience of a real patient and their health care providers in small groups through the school’s unique problem-based curriculum. For eight hours during the week, they work through the case in their team rooms. Each student spends additional time on their own exploring a related topic and presenting what they learn back to their small group.

At the end of the week, they meet the patient and their physician, and oftentimes family members and/or other health care providers. The goal is to have students think about the basic science they are learning through the lens of a real patient to build empathy and teach them how to think like a physician from the beginning of their education.

This week, the class will go through orientation, which includes information about school policies, procedures, and expectations, but they also experience their first patient case.

Next week, the Class of 2022 will begin their normal class schedule. In addition to problem-based learning, the curriculum focuses on robust education and training in basic science, clinical science, research, and interprofessionalism, which are the school’s four value domains.

The Virginia Tech Carilion School of Medicine opened in August 2010 and has graduated five classes, each with a 100 percent match rate to residency. (Related content from Virginia Tech Magazine: Finding the Right Match).