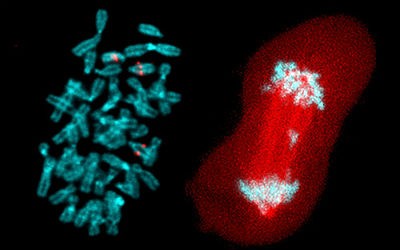 An international team of scientists, led by a Virginia Tech researcher, determined that the number of chromosomes in a cell may be a key to understanding how cancer forms and progresses – a finding that could help inform new treatments.

Healthy human cells need 46 chromosomes to maintain the body’s development and survival. However, when mistakes occur during cell division, cells may display abnormal numbers of chromosomes – a condition known as aneuploidy.

“It has been known for a long time that cancer cells typically display aneuploidy, but the role that it plays in cancer development and progression is not understood,” said Daniela Cimini, associate professor of biological sciences in the College of Science, a Fralin Life Science Institute affiliate, and a biology Fellow in the Virginia Bioinformatics Institute.

Using live imaging of human colorectal cancer cells and human cells derived from amniotic fluid, Cimini and her team found that when cells have an additional chromosome, the rate of cell division errors rises, increasing the frequency of aneuploidy.

Their discovery was published in May in eLife, an open-access journal focused on life science research.

“This work is exciting because previous studies in budding yeast suggested that aneuploidy can cause multiple forms of genome instability,” said Angelika Amon, the Kathleen and Curtis Marble Professor of Cancer Research at the Massachusetts Institute of Technology, who was not involved in the research. “This study shows that at least some aneuploidies can also cause genome instability in humans. This could also provide an explanation for how aneuploidy drives the formation of tumors.”

The team also identified a particular cell division defect in cells that have an extra copy of chromosome 13, as shown in this video.

“Cells that have an extra chromosome 13 often fail the last step of cell division, which is the final step of separation. This gives rise to cells with twice the number of chromosomes, which are known to be unstable and lead to tumor progression,” said Elsa Logarinho, director of the aging and aneuploidy lab at the Institute for Molecular and Cellular Biology in Porto, Portugal, and co-corresponding author of the study. “Aneuploidy might also contribute to the earlier steps of tumor formation, thereby emerging as a potential therapeutic target in cancer treatment.”

When cells with abnormal numbers of chromosomes divide, some of the daughter cells become diverse in chromosome number. That diversity, known as heterogeneity, may increase the tools a cancer can use to escape medical treatment.

“If you came up with the best drugs to kill 99 percent of cancer cells, that would not be enough, as the 1 percent would grow up to be heterogeneous again,” said Josh Nicholson, who completed his doctoral degree in Cimini’s laboratory last spring and is first author on the paper.

A group of cancer cells with a range of chromosome numbers also may be better able to adapt within certain environments, explained Cimini.

The next step for Cimini and her team is to understand how specific characteristics of aneuploid cancer cells, down to specific chromosomes, effect cancer growth. In addition, the team plans to investigate how environmental conditions affect chromosome stability.