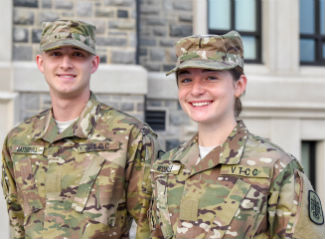 Three football players, chosen because of their performance in the last game or at practice, carry the American flag, the state flag, and the team’s spirit flag as they lead the team onto the field. They deliver the flags to cadets at the south end of the field.

The cadets, also selected based on their performance in the corps, render honor to the flags and carry them off the field. At home games, three first-year cadets are selected, and one or two upper-class cadets travel with the team and receive the flags at away games.

Bouchard, a first-year cadet in Army ROTC majoring in criminology in the College of Liberal Arts and Human Sciences with a minor in leadership studies from the corps’ Rice Center for Leader Development, was chosen for exceeding expectations when new challenges were sent his way throughout New Cadet Week training.

Battershall, a first-year cadet majoring in national security and foreign affairs in the College of Liberal Arts and Human Sciences with a minor in leadership studies, was chosen for giving his peers good feedback and instruction on how to improve. He is the recipient of a corps Emerging Leader Scholarship and is in Marine option Naval ROTC.

McConville, a first-year cadet majoring in English in the College of Liberal Arts and Human Sciences with minors in leadership studies and Arabic, was chosen for always striving to be the best she can be and her perseverance through training. She is the recipient of an Emerging Leader Scholarship and is in Air Force ROTC.