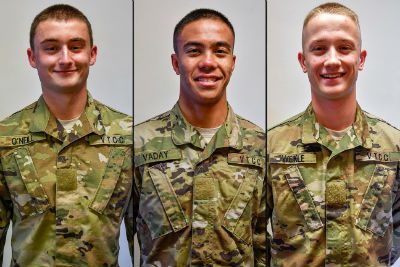 Three football players, chosen because of their performance in the last game or at practice, carry the American flag, the state flag, and the team’s spirit flag and lead the team onto the field. They deliver the flags to cadets at the south end of the field.

The cadets, also selected based on their performance in the corps, render honor to the flags and carry them off the field. At home games three first-year cadets are selected, and one or two upper-class cadets travel with the team and receive the flags at away games.

Weikle is a first-year cadet majoring in human nutrition, foods, and exercise in the College of Agriculture and Life Sciences. He is the recipient of a corps’ Emerging Leader Scholarship and in Army ROTC. He was chosen for his high performance, a positive attitude, and being willing to learn in order to grow as a cadet.

O’Neill is a first-year cadet majoring in engineering in the College of Engineering. He is the recipient of an Emerging Leader Scholarship and in Naval ROTC. He was chosen for his consistency in room and uniform preparation. He shows initiative and represents his unit’s motto by exceeding the standard and holding others accountable for their actions.

Vaday is a first-year cadet majoring in engineering in the College of Engineering. He is the recipient of an Emerging Leader Scholarship and in Army ROTC. He was chosen for his academic performance this semester. He is currently working toward becoming a member of Signal Corps, which is the corp’s buglers, by dedicating time to practice and improve.