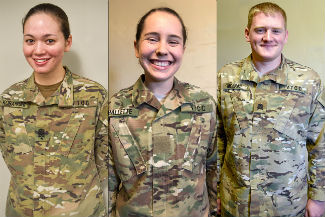 Virginia Tech cadets Hanna Kobayashi, Melonie Mallette, and Thaddeus Moskal will receive the flags at the final home football game of the season against Marshall.

Three football players, chosen because of their performance in the last game or at practice, carry the American flag, the state flag, and the team’s spirit flag as they lead the team onto the field. They deliver the flags to cadets at the south end of the field.

The cadets, also selected based on their performance in the corps, render honor to the flags and carry them off the field. At home games three first-year cadets are selected, and one or two upper-class cadets travel with the team and receive the flags at away games.

Kobayashi, a senior majoring in human development in the College of Liberal Arts and Human Sciences, was chosen for her work this semester as regimental executive officer and making sure the corps runs smoothly. She is skilled at connecting with those she’s responsible for and actively works to build stronger relationships. She is the recipient of a corps’ Emerging Leader Scholarship and in Naval ROTC.

Mallette, a first-year cadet majoring in human nutrition, foods, and exercise in the College of Agriculture and Life Sciences, was recognized for being a natural leader within her unit and for maintaining high military and academic standards. She is in Air Force ROTC.

Moskal, a senior majoring in psychology in the College of Science, was chosen for his work as the recruiting officer and helping to bring in the largest first-year cadet class in decades — 397 new cadets. He brings a positive attitude to his job and is always looking for ways to better the corps. He is the recipient of an Emerging Leader Scholarship and in Air Force ROTC.