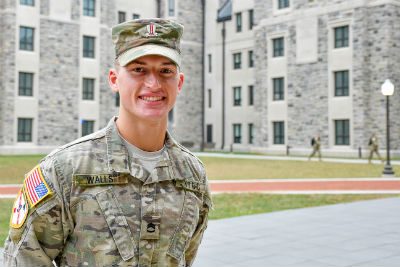 Three football players, chosen because of their performance in the last game or at practice, carry the American flag, the state flag, and the team’s spirit flag and lead the team onto the field. They deliver the flags to cadets at the south end of the field.

The cadets, also selected based on their performance in the corps, render honor to the flags and carry them off the field. At home games, three first-year cadets are selected, and one or two upper-class cadets travel with the team and receive the flags at away games.

Walls is a junior majoring in industrial and systems engineering in the College of Engineering. He is the recipient of a corps’ Emerging Leader Scholarship and in Naval ROTC.

He was chosen by his peers for the special duty for his actions, coaching ability, and attitude during New Cadet Week, when the entire first-year cadet class learns the basics of cadet life, including how to march and perform military drill.

Walls developed a “hot-cold” management technique for the training cadre in his unit, Foxtrot Company. Upper-class cadets worked in shifts, some creating an intense and involved training environment, while others waited in reserve and were able to focus on first-year cadets who needed extra help.