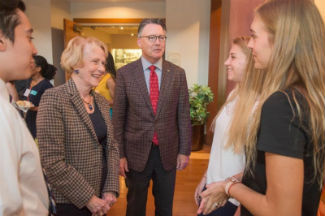 George Wenn III was certain he wanted to attend Virginia Tech. He did not know if he and his family could afford it. Then he got the email.

“When we learned about the Beyond Boundaries Scholars program it made Virginia Tech a real option for us, and here I am,” said the wildlife conservation major from Newport News, Virginia. “Everything is exactly as I hoped it could be. I’m at the school where I want to be, in the exact major I want to be in. This scholarship gives people the feeling that we can accomplish our goals if we set our minds to it and work hard. That feels great.”

Wenn is one of more than 130 members of the Class of 2021 to benefit from a matching gift program the university announced a year ago. The Beyond Boundaries Scholars program supports several of the university’s major strategic aims. These include enrolling far more students from underserved communities and reducing the number of high-achieving students from all communities who chose competing schools based on financial aid.

Thanks to nearly 50 donors, who combined gave over $401,500, more than $803,000 in aid is being provided to the first group of Beyond Boundaries Scholars to enroll. Through the program, which is ongoing, Virginia Tech doubles the impact of certain qualifying scholarship gifts.

“The spirit of this is amazing,” said Luisa Havens, Virginia Tech’s vice provost for enrollment management. “We asked donors to help pay it forward to help us provide an opportunity to students, and they truly responded. The number one barrier for students’ ability to pursue higher education in the U.S. is the ability to pay. One of the most effective facilitators of success is to remove that barrier.”

Michael Melo (forestry and wildlife ’79) is one of dozens of donors to step forward.

“My wife and I firmly believe in the value of education, and as we looked at the Beyond Boundaries Scholars program we realized it gives students an opportunity to attend Virginia Tech who otherwise might not have one” said Melo, who along with his spouse, Kathryn Melo, runs the defense contracting business ITA International. “The critical thinking that I learned at Virginia Tech has been a key element in my success as a Navy officer and as a business owner. We just want these young men and women to have the same educational opportunity that I did at Virginia Tech.”

Gary Cornwell (accounting ’73) said supporting the program was a natural extension of his philanthropy, which includes donating to the Pamplin College of Business and the Department of Athletics.

“This program is great not just for the students and for society, but for all of Virginia Tech,” said Cornwell, a retired partner as a taxation director in the Brown Edwards accounting, assurance, tax, and management advisory services firm. “In the classroom or on the athletic field, when you have great students they push everybody. It makes other students achieve more, too.”

Mary “Prim” Jones (mechanical engineering ’62) comes from a line of Hokies that includes her brother, cousin, and niece — and began with her father, a member of the Class of 1921. Thanks to Jones’ donations, several Beyond Boundaries Scholars are on pace to earn their Virginia Tech degrees in 2021 — 100 years after her father did.

“I believe it’s very important for the university to attract the top percent of students,” said Jones, a retired executive of what is now Aerojet Rocketdyne. “If a young person has the ability to get accepted to Stanford, MIT, and Virginia Tech, we have to have an outstanding offer to get them. If they come and see our campus that seems to help, but the bottom line is usually financial aid money. This program helps us get the top students in the nation that we recruit. That, to me, is very attractive.”

Beyond Boundaries Scholars come from Virginia and 14 other states.

“This scholarship means the world to me,” said Kennedy McLeod, a biological sciences major from Columbia, South Carolina. “Attending an out-of-state school can be very hard because of the difference in tuition prices, but I’ve always wanted to get out of my comfort zone and go to a completely new area from where I grew up and lived my whole life. This scholarship is what allowed me to actually pursue that, and I’m forever grateful.”