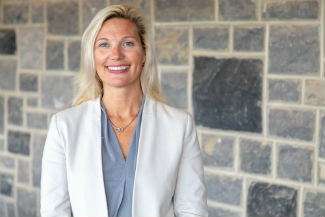 Virginia Tech has appointed Kim Blair as an assistant vice president of advancement to lead fundraising and help with outreach and strategic communication initiatives centered in Roanoke.

Blair has served as a principal gifts officer within the university’s Advancement Division since 2015. In this role she has helped secure multimillion dollar gifts supporting the Department of Mechanical Engineering and the Program in Real Estate.

“We have multiple, high-impact initiatives underway in Roanoke, all of which can have a more-powerful effect if we coordinate our advancement efforts,” said Charlie Phlegar, Virginia Tech’s vice president for advancement. “Kim’s appointment puts us in better position to do that. She has a talent for bringing people together to make ambitious visions come about.”

Mike Friedlander is Virginia Tech’s vice president of health sciences and technology and the executive director of the VTC Research Institute, VTCRI for short, which is expanding with a new, 139,000-square-foot building under construction.

“I’m excited by the opportunity to continue working with Kim at an even higher level,” Friedlander said. “In my role as vice president for health sciences and technology, I have had the pleasure of working with her on multiple advancement projects for the Roanoke campus’ school of medicine and research institute. I have been equally impressed in my role as executive director of the VTCRI with how effectively Kim; the research institute’s director of development, Garrett Weddle; and our director of communications, John Pastor, have partnered on innovative and integrated advancement projects. I look forward to more and greater successes working with each member of this outstanding team.”

Blair has 25 years of advancement experience. Since 2016, she has been working to advance the VTC Health Sciences and Technology Campus in the Roanoke Innovation Corridor by engaging key stakeholders including alumni, leaders in the Roanoke Valley business community, and public officials in Roanoke and beyond. She will be expected to build on this groundwork to attract transformative philanthropy that supports groundbreaking discoveries and world-class medical education — and helps ensure a thriving economic future for the region.

“I look forward to working alongside our visionary leaders in Roanoke and the talented team of fundraisers and communicators we have there to establish new partnerships, raise money, and amplify VTC’s profile,” said Blair, who assumes her new role on Sept. 25.

The research institute and school of medicine were created through a public-private partnership between Virginia Tech and Carilion Clinic, two major drivers of Southwest Virginia’s economy.

In July 2018, the Virginia Tech School of Medicine officially became a college of Virginia Tech. Blair’s duties will include working on the school’s behalf in partnership with its director of development, Mark Morrison; director of communications, Alison Matthiessen; and director of alumni affairs and special events, Lynne Pearo-Baker.

“The importance of the Virginia Tech Carilion enterprise to Roanoke’s economic future cannot be overstated,” said Heywood Fralin, a lifelong resident of the city who is chairman of Medical Facilities of America and a leader in regional economic development efforts. “Having a senior advancement professional like Kim focused on maximizing VTC’s potential is most welcome.”

The VTC campus and Virginia Tech’s partnership with Carilion Clinic are projected to contribute nearly half a billion dollars per year to the commonwealth’s economy by 2026.