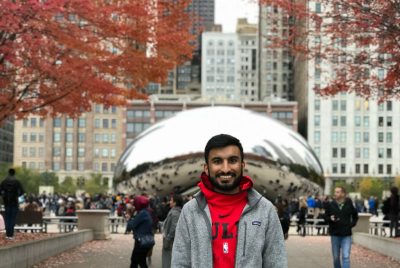 “Chicago is an amazing city to live in, and people here are extremely passionate about basketball,” said Faizan Hasnany, shown here in the city’s Millennium Park.

Among the thousands cheering on the Hokies Friday as they played the Blue Devils in the NCAA men’s basketball tournament was a young Virginia Tech graduate who followed his own hoop dreams.

“I’ll look at some stats after the game,” Hasnany said of Friday’s matchup, “but my eyes will be fixed on the screen for what will hopefully be a really entertaining game and a Hokies win.”

Hasnany said he was impressed with the strides the program has made under coach Buzz Williams. “The team has some great experience and chemistry going for it this year. It is also arguably the most talented Hokies team I have seen since following college basketball,” Hasnany said.

Hasnany has followed the sport since childhood. When he was 7 years old, he and his cousins threw a party for Michael Jordan’s 40th birthday. “We invited all our friends from school, shot hoops in the driveway, and yes — there was even cake. We were obsessed,” he said.

Basketball was a bridge to the world outside his home and family. Hasnany moved to the United States from Pakistan with his parents and two sisters when he was a year old. Growing up in suburban Washington, D.C., he had to negotiate his way around cultures old and new.

The sandwiches his mom packed for school lunches held kabobs instead of peanut butter and jelly. “I didn’t know the American music, movies, or other pop culture references the other kids learned from their parents,” Hasnany said.

Then he discovered basketball: “a universal pastime that I fell for right away, because I could relate to anyone with it, regardless of their background.”

As a student in the Pamplin College of Business, Hasnany was eager to learn how to use technology to drive decision making in business.

His ardor for basketball didn’t wane. In his sophomore year — “with zero writing experience” — he joined the Collegiate Times as a sports writer, hoping to sit courtside at games. He quickly became the sports section editor and, for about two-and-a-half years, covered every Hokies basketball game he could.

He saw how rapidly the whole sport was changing. “Teams began to leverage technology and data analytics to drive their decision making on the court, including Virginia Tech, which was at the forefront of the analytics movement under Coach Williams,” he said.

“Just like that, my two passions had collided. NBA teams started expanding their analytics departments, and I did everything I could to pursue basketball as a potential career.”

Seeking to advance his analytics knowledge and skills, he went to force-add a course to learn R programming, a statistical programming language for data analysis and statistical applications.

“That program gave me everything I needed,” Hasnany said, including “analytics fundamentals, great mentors, and indispensable communication and leadership skills.”

A solid technical foundation aside, he also gained an understanding of how to address stakeholder needs and how to add value.

“Being able to develop a complex model using all the data available to you is great, but if you can’t make something that’s interpretable and that can be implemented in an impactful way, you may just be wasting time and resources,” Hasnany said.

While a student, Hasnany also wrote about analytics and basketball for NBA Math, including an article on a metric he developed to assess a player’s current and potential monetary value.

Analytics, he said, has become essential to the process of making smart decisions as a basketball team and in sports in general.

“With new technology providing access to so much data, analytics can be used in all parts of a team’s operations, from trying to analyze which players fit what you’re trying to accomplish, how to better measure certain traits of players beyond what is seen in traditional box scores, and even help manage players’ workloads on the court or field.”

Hasnany landed a summer internship in basketball analytics operations at the Phoenix Suns upon graduation. He joined the Bulls in September 2018.

Mike Flint directs Pamplin’s Center for Business Intelligence and Analytics, which runs the master’s program in analytics. He recalled the “great work Faizan and his team did on their capstone project with Norfolk Southern” and is delighted by Hasnany’s career progress.

“It was my privilege to see him courageously follow his dream of sports analytics — from large-company consulting, to an internship with an NBA team, to finally working for the Bulls,” Flint said. “Faizan exemplifies the ‘High-Impact Business Analytics Leaders’ we’re developing in CBIA.”

Hasnany realizes he’s living his dream. “I’m extremely grateful to be able to do what I love, and I couldn’t ask for better people to work with and learn from,” he said. “Chicago is an amazing city to live in, and people here are extremely passionate about basketball.”