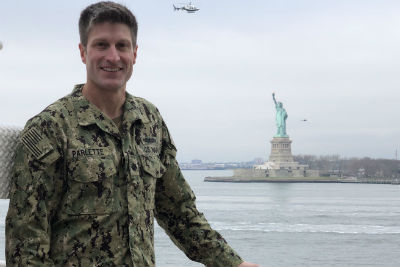 Eric Parlette quickly responded when summoned to the front lines of the battle against the COVID-19 pandemic.

“I got the call on a Saturday night. They said, ‘Hey would you be willing to go,’ and I said, ‘absolutely,’ and four days later I was on a ship to go help strangers,” said Cmdr. Parlette, a Navy reservist and doctor in the Medical Operations Center on the USNS Comfort.

Parlette ’94 and the other crew members of the Comfort sailed into Manhattan on March 30 to aid the city’s hospitals, which were overwhelmed with patients related to the coronavirus outbreak. They spent the next month treating a combination of very sick people with and without the virus.

“Medical is typically ancillary support for military operations for when things go bad. But in this case, health care is the tip of the spear to take on this attack, an attack on American soil no less,” said Parlette, who lives in Richmond. “There is no other answer than ‘yes, I have go.’”

The willingness to help others is a core belief for Parlette, which he credits to both his upbringing in a military family – his father also served in the Navy – and his time at Virginia Tech.

“The top two things I really value being a part of are Virginia Tech and the military, because they are about service, leadership, and helping build up other people,” Parlette said. “They both provide an opportunity to serve and be a part of something bigger than yourself.”

Parlette, who spent his adolescent years in Maryland, said Virginia Tech gained visibility on his radar as a possible university to attend as he continued to visit his brother, Les ’91, and saw the warm, welcoming, and collegial environment of Virginia Tech.

“Every time I went to visit Tech, I felt included and welcome. I felt like I was already family. It’s just a super tightknit place,” he said.

With his decision made, he went on to earn a bachelor’s degree in psychology, with minors in biology and chemistry, while also running on the Hokies cross-country and track teams.

Following graduation, he joined the Navy via the Health Professions Scholarship Program to cover medical school at the University of Virginia. After medical school, he served nine years on active duty in various locations across the globe, including two years with a Marine infantry battalion as well as completing his dermatology residency. He separated from active duty to complete a dermatologic surgery/Mohs surgery and cosmetic fellowship in Boston, and now works in private practice. He recommissioned in the Navy Reserve in 2012 because he missed the service, camaraderie, and being part of something bigger than one’s self. He is currently an instructor for the Naval Leadership and Ethics Center and teaches leadership and ethics to intermediate and senior Navy Reserve officers across the country.

While on the Comfort, Parlette served as one of four physicians in the Medical Operations Center, responsible for communications with surrounding medical facilities and facilitating logistics, admissions, and discharges of patients on and off the ship. From where they were docked in Manhattan they could see the tops of the buildings in Times Square and feel the eeriness of the city’s current state.

“You don’t hear any street noise. You don’t really hear anything go by,” Parlette said, during an interview before the ship departed Pier 90 on April 30.

Despite the Comfort’s mission in New York City drawing to a close, Parlette said that his sense of duty was cultivated in Blacksburg.

“It was fundamental, the culture at Tech, revolving around the motto Ut Prosim. I think the mindset of service comes with a sense of humility, which is incredibility important, and produces the best kind of leaders,” Parlette said.