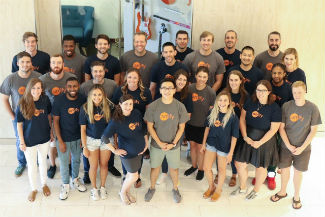 Employees at Amify, which was started by Ethan McAfee ’98 (back row, center) in 2010 to sell products to play Pickleball. Today, the company is called Amify and helps other brands maximize their potential on the Amazon marketplace.

For a young entrepreneur with business on his mind, Virginia Tech was a great place to be in the ’90s.

Coming out of high school in Virginia Beach, Ethan McAfee looked at Virginia Tech as ahead of the game in technology. The Blacksburg Electronic Village gave students a leg-up on the rapidly growing internet, and he saw the university’s SEED team — a student-run investment portfolio in the Pamplin College of Business — as a unique opportunity.

“Virginia Tech has always been a fast-mover on a lot of these new initiatives that 10 years later become a big deal,” said McAfee. “People who are going to school at Virginia Tech now are way ahead of the curve, versus others that aren’t as technology-friendly.”

McAfee — a double-major in finance and accounting information systems who is distantly related to James McAfee, the colonial-era settler for whom McAfee Knob was named — was head of SEED’s technology sector, meaning that he chose what stocks to invest in the rapidly growing tech sector of the mid-90s. That put him in perfect position entering the job market at the height of the internet boom.

McAfee ’98 has always had an eye for spotting developing trends. He turned his SEED experience into a job at investment firm T. Rowe Price, then became an early portfolio manager at the hedge fund Ramsey Asset Management. After 11 years in which he met with entrepreneurs from hundreds of companies, including Mark Cuban, Meg Whitman, and Jeff Bezos, McAfee took a year off before launching his own company.

“I had all this knowledge about technology and internet companies,” McAfee said. “I had always said that instead of investing in companies, it would be great to start my own.”

In 2010, McAfee looked at the changing retail landscape in America and realized the potential for selling through Amazon, which he calls “the mall of the internet.” Amazon’s fulfillment services meant that an entrepreneur could build a retail business while keeping overhead costs low.

“All of a sudden a person working out of a townhouse could have a real e-commerce business and not have to worry about warehousing, about boxing products, about dealing with returns, about having to go to UPS everyday,” McAfee said. “You could start an e-commerce business out of your house. So I did.”

The next step was figuring out what to sell. Inspiration came from his parents, who lived in a Florida retirement community that McAfee describes as “basically the pickleball capital of the world.”

“Pickleball is this really fun game, like mini-tennis,” McAfee said. “You play it with what looks like a big pingpong paddle, with a whiffle-ball on a tennis court. You play doubles. Old people love it because it’s a lot of volleying and not much running. It’s a co-ed sport, and it becomes very social. You get to talking, make friends, all these good things.”

The only problem, his parents complained, was that it was difficult to find equipment for it. They couldn’t find it at local stores, only online. McAfee quickly saw the opportunity.

“Here’s a rapidly growing niche product you can’t find at local stores,” McAfee said. And there weren’t that many products to sell, which allowed him to invest in a smaller inventory and still compete with bigger retailers.

He launched the company in 2010 and rapidly expanded to incorporate other products. Today, the company that started out as Pickleball Direct and became Amify in 2017 has roughly 50 employees, has sold more than $100 million of products through Amazon, and has made the Inc 500 list twice and the Inc 5,000 list four times. It’s moved on from selling to helping other brands maximize their potential on the Amazon marketplace. It’s headquartered in Alexandria, Virginia — not far from the planned site for Virginia Tech’s new Innovation Campus — and has satellite offices in Las Vegas and Cincinnati, Ohio. Pickleball represents only about 1 percent of its total revenue.

“Publicly, if you look on the Inc 5,000 list, our revenue last year was roughly $25 million,” McAfee said. “We’ll grow probably grow 35 percent this year to about $33 million in revenue. The market’s growing. It’s an exciting time.”

Amify uses technology to determine which among the millions of products it should sell. It works with hundreds of brands. Besides selling products, it also offers consulting services to help companies boost their presence on Amazon.

Alana Clark, a senior marketing major from Fairfax, interned at Amify over the summer. Clark, whose older brother Andrew Clark ’11 is also a Hokie, found the internship through LinkedIn and quickly applied.

“Amazon is basically taking over the world,” Alana Clark said. “I thought it would be an incredible experience to be on the other side at Amazon. Yes I’m a consumer, but I wanted to see the other side of what goes on in the Amazon world.”

She arrived at Amify at the end of May 2018 to find an open office that gave her open access for daily conversations with CEO McAfee.

“On my first day when I walked in, I made sure to introduce myself to Ethan,” Clark said. “Of course, Hokies can talk about Virginia Tech for hours. We had fun talking about even funny little things. He asked, ’Is TOTS still the most happening bar?’ Yes, of course it is!”

At Virginia Tech, Clark participates in PRISM, a student-run advertising agency. In the club, she had practiced developing and presenting social-media strategies for clients. At Amify, Clark put that into play, developing and executing a plan for the summer. She began by building a presentation for the company’s marketing manager.

“He was impressed that Virginia Tech had taught me to work through such a huge portion of a business plan and lay it all out in a creative and graphically enticing way,” Clark remembered. “He said, ‘Virginia Tech is doing something right.’”

Clark put the plan into effect, setting an ambitious goal for growth in social media presence. By the end of the summer, Amify had gotten close to that target, falling just short of her goal but growing exponentially in the process. The company considered it a success.

“Ethan McAfee totally portrays the Hokie spirit,” Clark said. “He’s kind, he cares, but he’s such a hard worker and knows he needs to get stuff done. He’s got a vision, but he doesn’t have tunnel vision to the point where he doesn’t care about his employees or family.”

As for McAfee, he sees that the frontier days for Amazon vendors are coming to a close. The market has become entrenched, with larger retailers, such as Amify, having consolidated their market.

He’s got advice for starting your own business, though, that applies broadly: “Surround yourself with a whole bunch of other entrepreneurs who do that. You can find some amazing organizations that will help you do that. Here in Washington, D.C., I’ve found a huge nonprofit group of entrepreneur peers who share best practices and other advice. That’s been life-changing for me.”