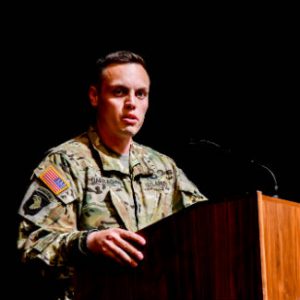 U.S. Army Capt. Aaron Barragan speaks to cadets during the fall Gunfighter Panel, in which Corps of Cadets alumni share their experiences with students.

U.S. Army Capt. Aaron Barragan, a 2014 graduate of the Virginia Tech Corps of Cadets, has always believed in the idea of selfless service.

It’s what drew him to a career in the military at a young age. It’s part of the reason he chose Virginia Tech, where the university motto is Ut Prosim (That I May Serve). There he earned bachelor’s degrees in political science and history and played on the university’s lacrosse team with support from a corps’ Emerging Leader Scholarship and a four-year Army ROTC scholarship.

“If you have the means and ability to help, then for me, you have the moral obligation to do so,” Barragan said. “I wanted to a job that would allow me to positively impact the greatest number of people that I could. The military was the perfect place to hone this instinctive trait.”

Today, Barragan is a medevac pilot — one of the first corps’ alumnus to follow that path after graduation — and in November arrived at his first overseas duty station at Camp Humphreys, South Korea. He is a platoon leader in the medevac company within the 3-2 General Support Aviation Battalion.

“Our mission is a do-or-die situation,” he said. “When you are able to take part in bringing home a father, mother, son, or daughter, nothing in the world replaces that feeling. It is because of the support from our team that a person is able to see tomorrow. It is the most rewarding feeling in the world and in my mind, it is the epitome of selfless service.”

In his first assignment, Barragan served as a section leader within the 6th Battalion, 101st Aviation Regiment at Fort Campbell, Kentucky. He graduated from Air Assault School and supported humanitarian missions after hurricanes Irma and Maria in 2017 with medical rescues and food and water delivery.

In 2018, he deployed to Afghanistan to serve as a platoon section leader at a forward austere site. There, he performed more than 15 combat rescues and worked with operational planning.

Since then, he’s been back at Fort Campbell as a platoon leader with the 6th Battalion, 101st Aviation Regiment.

In September, he returned to Virginia Tech to be part of the corps’ fall Gunfighter Panel, a way for corps’ alumni to connect with today’s cadets by sharing their experiences after graduation.

As a first-year cadet, Barragan only knew he wanted to join the military, following in the footsteps of at least one person in every generation of his family. He chose the Army, but had no idea what he wanted to do.

He discovered aviation through his Army ROTC classes and becoming a pilot quickly became a passion. But during his junior year, the Army changed its required scoring on its aviation flight physical, and Barragan was no longer eligible for flight school.

“I was crushed,” Barragan told cadets. No other job in the Army inspired him, but he kept searching.

At an Army career information session about the medical services branch, which employs doctors, nurses, and health care administrators, Barragan met a major who was a medevac pilot. Being accepted into the program was a long shot — only 30 of 300 applications were accepted each year — but Barragan knew he had to try.

He was one of 27 people accepted to train as a medevac pilot.

“Life is going to throw you challenges. You will fail. That is a fact. How you respond to these failures, these roadblocks, is on you,” he told cadets.

“Failure is the best teacher you have. If you succeed at everything you do, you will never learn what’s on the other side. Failure teaches you that you have the strength to get back up.”