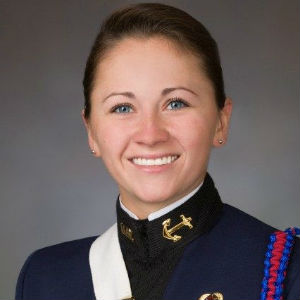 On Nov. 9, in a rainy and somber ceremony, the Virginia Tech Corps of Cadets dedicated the engraving of the name of U.S. Navy Ensign Sarah Mitchell of the Class of 2017 on the Ut Prosim Pylon during a ceremony at the War Memorial.

Mitchell, of Feasterville, Pennsylvania, died July 8 during a Naval training exercise in the Red Sea. She was 23.

Mitchell’s is the 432nd name added to the Pylons and the first woman. Mitchell’s large family and the whole corps attended the ceremony.

“When horrible accidents befall those we live with, work with, and care for, we often search frantically for some sort of deeper meaning behind the tragedy,” said Cadet Daniel Grigg, a senior in Naval ROTC majoring in political science with a focus in national security and foreign affairs. “I have come to realize that Sarah’s death serves as a reminder of one of life’s simplest and most painful truths. Life is unbelievably, abruptly, blink-and-you-miss-it short. Cherish it each day.”

Mitchell graduated with a degree in biochemistry and minors in chemistry and leadership studies. She commissioned in May 2017 and reported to the guided-missile destroyer USS Jason Dunham as a surface warfare officer that June.

The Virginia Tech Board of Visitors honored Mitchell with a resolution at its August meeting, recognizing her “unwavering courage and valor.” President Tim Sands honored her with a moment of silence at his State of the University address in September and attended Friday’s ceremony.

The Pylons are a representation of Virginia Tech’s values. The values engraved on the eight pylons are, from left: Brotherhood, Honor, Leadership, Sacrifice, Service, Loyalty, Duty, and Ut Prosim. The Pylons are etched with the names of every Virginia Tech student and graduate who died defending our nation’s freedom, beginning with those lost during World War I.

At the War Memorial’s center, the cenotaph displays the names of Virginia Tech’s seven Medal of Honor recipients.