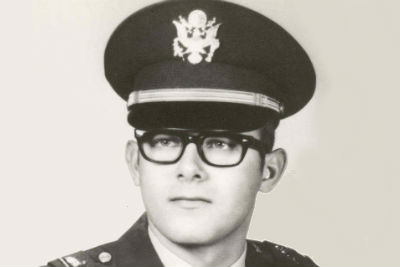 A unit commander in the U.S. Army, 1st Lt. Gary Lee Miller died from wounds he received after smothering an enemy grenade to save the men he was leading in South Vietnam on Feb. 16, 1969. Photo courtesy of the Miller family.

More than a half century after taking on the ultimate act of service, the name of 1st Lt. Gary Lee Miller has been rightly placed in a position of honor at Virginia Tech.

A unit commander in the U.S. Army, Miller died from wounds he received after smothering an enemy grenade to save the men he was leading in South Vietnam on Feb. 16, 1969. He posthumously received the Medal of Honor, but his connection to Virginia Tech remained mostly unknown until recently brought to light by alumnus Charlie Wood, of Richmond, Virginia.

Earlier this year, Miller’s name was etched alongside Virginia Tech’s seven other Medal of Honor recipients on the marble cenotaph at the center of War Memorial Court.

“I’m just glad he’s finally going to be recognized there,” said Wood, a 1970 graduate and 2017 recipient of the Alumni Distinguished Service Award. “Those names represent the highest level of service a person can give. Lieutenant Miller’s service and sacrifice truly represent our university, Ut Prosim” (That I May Serve).

Miller will be honored during a small ceremony at 3 p.m. Friday, Nov. 6, at the Pylons, and President Tim Sands will speak. To support COVID-19 safety measures, those interested in watching the ceremony should view it from the livestream below or on the university’s YouTube page.

During the event, the Gregory Guard, the Corps of Cadets’ precision drill team, will perform a rifle salute, and buglers will play “Echo Taps.” The portion of Drillfield Drive that passes in front of the Pylons will be closed between Kent and Stanger streets during the ceremony, expected to last about 30 minutes. Authorities will be in place to help guide drivers around the closures.

Miller attended Clifton Forge-Covington for four quarters, spanning 1965 and 1966. Protocol for inclusion on the cenotaph is for the Medal of Honor recipient to be an alumnus, whether a graduate or not.

Miller’s connection to Virginia Tech was well known to Wood, who grew up in Alleghany County, which surrounds the independent city of Covington. Though not close friends, the two shared mutual acquaintances during high school and attended the community college at the same time.

Wood said he had long revered those who gave their lives in defense of the United States and was particularly moved by the War Memorial during his time as a student in Blacksburg. He entered the Army after graduating in 1970.

“I spent a lot of time there at night, walking back from the library to the dorm,” Wood said. “I’d go up and read the names of those enshrined on the War Memorial and try to comprehend their service and sacrifice. Doing so did and still has the most influence on me of anything at Virginia Tech.”

Wood first began to inquire about getting the fallen soldier’s name represented by the university in 2005. For years, he struggled to find the necessary documentation, and in 2018 he was able to connect with Miller’s younger brother, Michael Miller ‘75.

“I was just kind of floored that this fellow had worked so hard for so long to make this happen,” Michael Miller said. “Obviously, my brother made a big impression on him.”

Six years younger than Lt. Miller, Michael Miller described his brother as a “regular kid” who was interested in architecture and science, had a paper route, and was a wrestler at Covington High School. He recalled him achieving the Boy Scouts of America’s God and Country award and several awards for marksmanship once in the Army.

Michael Miller said he is proud that his brother will now be remembered at the War Memorial along with other Hokies who paid the ultimate price.