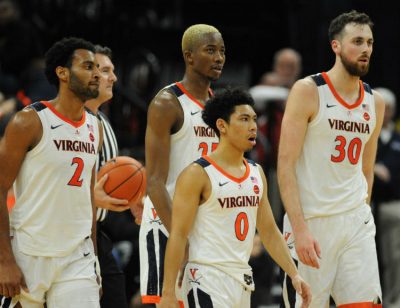 Virginia led by 13 with 3:27 to go, survived an extended bout of gag reflex, and held on with a Braxton Key free throw to beat Pitt, 59-56, on Saturday.

But then came the issue with gag reflex. After a Terrell Brown and-one, Kihei Clark turned the ball over on the inbounds, and Trey McGowens buried the open three, and just like that, in a span of 14 seconds, it was a seven-point game.

Johnson missed the free throw on a possible and-one, but Pitt forced a shot-clock violation, giving itself one last chance.

McGowens missed a contested step-back three with 4.3 seconds left. Key got the rebound, was fouled, made the front end of the one-and-one, missed the back end, setting up the final sequence.

Pitt coach Jeff Capel called timeout to set up a play, action for guard Ryan Murphy, but Murphy wasn’t able to get a shot off before time expired.

Up until those final three-plus, it had been a nice road effort from the Cavaliers, who led by two at the half despite foul trouble limiting bigs Mamadi Diakite and Jay Huff to nine minutes of floor time each in the opening 20 minutes.

Virginia opened the second half on an extended 13-2 run, limiting the Panthers to one make in 13 tries from the field in the first 7:50.

The lead would remain in double digits until the backcourt turnover that led to the McGowens three, the key play in the wild finishing run.

Clark led the ‘Hoos with 17 points on 6-of-11 shooting, but he also had six turnovers, as Virginia had a ghastly 16 as a team.

A big part of Pitt clawing its way back into the game late was its effort on D. Virginia made just two of its last 13 shots from the field in the last 12:18.

As nerve-wracking as the end sequence was, it was Virginia’s seventh win in its last eight games, so, breathe.