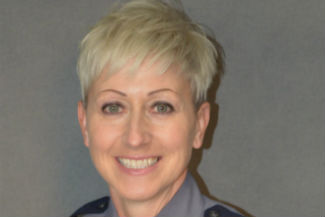 Powers has been serving as the commander of the Criminal Justice Information Services (CJIS) Division since her promotion to captain in 2016. Since transferring to CJIS as a lieutenant in 2013, Powers has provided leadership to the division’s 250 sworn and civilian personnel, and overseen the state’s Central Criminal Records Exchange (CCRE), Sex Offender Registry, Firearms Transaction Center, Automated Fingerprint Identification System (AFIS), Virginia Criminal Information Network (VCIN), and the Uniform Crime Reporting/Incident Based Reporting program. She represented the Department as a gubernatorial appointee to the SEARCH Consortium and as the FBI CJIS Systems Officer.

Powers graduated the Virginia State Police Academy in 1994 with the 90th Basic Session. Her first patrol assignment as a new trooper was in the Culpeper Division’s Area 13 Office in Winchester. In 1997, she was promoted to special agent and advanced to the rank of first sergeant working in general investigations and drug enforcement in the Culpeper and Chesapeake Bureau of Criminal Investigation (BCI) Field Offices.

She returned to uniform as a first sergeant in 2010 as the commander of the Chesapeake Division’s Area 32 office in Norfolk/Virginia Beach. In 2012, Powers was promoted to lieutenant in the Richmond Division. A native of Luray, Va., Powers is a 2012 graduate of the FBI National Academy in Quantico. She earned a bachelor’s degree in education from Bridgewater College and a master of criminal justice degree from Troy State University.

Miller was appointed to the BASS deputy director position in September 2016. Previously he had served three years as the division commander of the Information and Communication Technologies (ICT) Division. Prior to his promotion to captain of the ICT Division, Miller served nine years in the capacities of lieutenant and first sergeant in the BCI Criminal Intelligence Division. He joined State Police as a dispatcher in 1992 and was assigned to the State Police Culpeper Division.

He graduated from the State Police Academy in May 1994 with his first patrol assignment in Caroline County. Three years later, Miller was promoted to special agent in the Drug Enforcement Section of the Richmond BCI Field Office. A graduate of Emory and Henry College with a bachelor’s degree in history and geography, he has received numerous service awards during his tenure with the Department and has served on numerous state and national boards and subcommittees related to public safety telecommunications and homeland security. He is also a 2007 graduate of the National Criminal Justice Command College.

The Bureau of Administrative and Support Services consists of the Information and Communication Technologies, Criminal Justice Information Services, Human Resources, Property and Finance, and Training divisions. Employees within this Bureau provide the Virginia State Police, as well as local and other state law enforcement, with support and essential services through their expertise and technical and professional backgrounds. BASS includes the largest number of civilian personnel within the department.