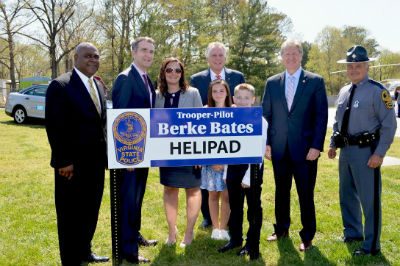 “The Trooper-Pilot Berke Bates Helipad will serve as a lasting tribute to Berke’s incredible spirit and legacy as a public safety professional, aviator, father, son, brother, and friend,” said Col. Gary T. Settle, Virginia State Police Superintendent. “This memorial will be seen by those visiting our administrative headquarters and Academy. It is also rightly located just across the way from the very Academy doors Berke proudly walked through in January 2004 to begin his career as a Virginia State Police trooper. We hope this simple, but meaningful, tribute brings added and lasting comfort to his family, friends, and colleagues.”

Trooper-Pilot Bates was born in Manassas, Va. and graduated from Brentsville District Middle-Senior High School in Nokesville, Va. in 1994. He served as a Trooper with the Florida Highway Patrol from 1998 until he joined the

State police initiated an aviation program in 1946 with four trooper-pilots who voluntarily worked on as an-needed basis and the acquisition of three Aeronca Chief 11AC airplanes. Helicopters were added to the fleet in 1970. The Department established an official Aviation Unit in 1984, which was the same year the Virginia General Assembly authorized funding for the creation of the Med-Flight program. Today the Virginia State Police Aviation Unit has 16

The National Transportation Safety Board (NTSB) investigation into the fatal helicopter crash remains ongoing at this time.