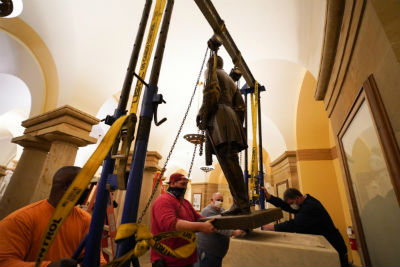 The statue of Confederate general Robert E. Lee that had stood in the National Statuary Hall Collection representing Virginia since 1909 was removed from the United States Capitol Sunday night.

A representative from the governor’s office was present for the removal along with U.S. Sen. Tim Kaine and 10th District Congresswoman Jennifer Wexton.

The Lee statue has stood along with America’s first president George Washington as Virginia’s contributions to the National Statuary Hall Collection.

The Lee statue had been one among 13 located in the Crypt of the Capitol, representing the 13 original colonies.

“We should all be proud of this important step forward for our Commonwealth and our country. The Confederacy is a symbol of Virginia’s racist and divisive history, and it is past time we tell our story with images of perseverance, diversity, and inclusion,” said Gov. Ralph Northam, who signed legislation earlier this year establishing the Commission for Historical Statues in the United States Capitol charged with studying the removal and replacement of the Robert E. Lee statue.

The eight-member commission, chaired by State Sen. Louise Lucas, voted unanimously on July 24 to recommend removal of the statue.

“Confederate images do not represent who we are in Virginia, that’s why we voted unanimously to remove this statue,” Lucas said. “I am thrilled that this day has finally arrived, and I thank Governor Northam and the Commission for their transformative work.”

At the request of the commission, the Virginia Museum of History and Culture in Richmond will accept ownership of the statue.

A statue honoring civil-rights icon Barbara Rose Johns, who as a teen led a walkout at her all-Black high school in Farmville that paved the way for school desegregation, will replace the Lee statue

The April 23, 1951 walkout at the all-Black Robert Russa Moton High School led by Johns, then 16, gained the support of a pair of NAACP lawyers, Oliver Hill and Spottswood Robinson, whose lawsuit challenging school segregation would eventually be among the suits that the U.S. Supreme Court reviewed in Brown v. Board of Education in 1954.

The walkout led by Johns is considered by historians to be a pivotal moment in the path toward school desegregation.

“As of this morning, Virginia will no longer honor the Confederacy in the halls of the United States Capitol,” said State Del. Jeion Ward, who sponsored legislation creating the Commission. “When I think of Barbara Johns, I am reminded of how brave she was at such a young age. It’s time for us to start singing the songs of some of the Virginians who have done great things that have gone unnoticed. This is a proud moment for our Commonwealth, and I am humbled to have been a part of it.”

The General Assembly must approve the replacement before a sculptor can be commissioned.  If approved, Johns would complement the statue of Washington, and would be the only teenager represented in the collection.

Northam has introduced a budget that includes $500,000 to replace the statue.

“I look forward to seeing a trailblazing young woman of color represent Virginia in the U.S. Capitol, where visitors will learn about Barbara Johns’ contributions to America and be empowered to create positive change in their communities just like she did,” Northam said.