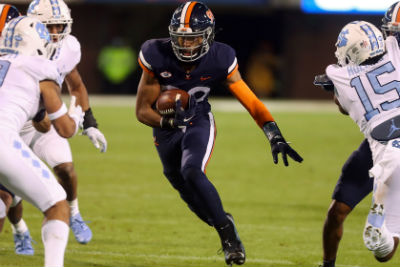 Virginia coach Bronco Mendenhall rolled the dice, ran a fake punt from the UVA 42 with 2:02 to go, and it worked, with Keytaon Thompson picking up the first down, allowing the Cavaliers to run out the clock on a wild 44-41 win over #15 North Carolina.

Mendenhall, for good reason, didn’t want to leave the game in the hands of his defense, which was missing starting safeties Joey Blount and Brenton Nelson, among others, and had surrendered 536 yards to UNC, which stormed back from a 41-20 late third quarter deficit to get back to a one-score game.

Stat line of the night: Carolina quarterback Sam Howell was 23-of-28 passing for 443 yards, four TDs, no INTs, and his team lost.

The Tar Heels (4-2, 4-2 ACC) had two turnovers, a late second quarter muffed punt that led to a UVA touchdown, and a strip sack of Howell that led to another ‘Hoos TD.

A pair of Howell TD passes to Dyami Brown in a 2:42 stretch spanning the end of the third and the beginning of the fourth got North Carolina back to 41-34.

Virginia then went on a classic clock-eating march – 15 plays, 58 yards, taking 9:02 off the clock, getting the ball into the red zone, before settling for a 35-yard Brian Delaney field that put the lead at 44-34 with 4:07 left.

A Javonte Williams 3-yard TD run capped a quick four-play, 75-yard drive that made it a field-goal game at the 2:51 mark.

UNC had all three of its timeouts to use to try to stretch the clock, and used two as Virginia efforted at a first down, losing Armstrong to a lower-leg injury on a 3-yard run on first down in the process.

It got to fourth-and-four from the Virginia 42, and Mendenhall sent the punt unit onto the field after Carolina burned its second timeout with 2:02 to go.

Thompson, who took snaps at QB, running back and wideout, was in the formation as an up back. He took a direct snap, on a run play designed to go to the right.

There was nothing there, so Thompson ran naked to the left, and outran the UNC defense for five yards and the game-clinching first down.

Thompson threw for 208 yards and three touchdowns, with a fourth quarter INT, on 12-of-22 passing, and he had 66 yards and a TD on the ground.

Backup tailback Shane Simpson had 70 yards on eight carries on the ground, and a 71-yard TD catch in the first quarter.

UNC outgained Virginia 536-418, but had trouble converting all its productivity into points, settling for two field goals, missing a third, and fumbling inside the 5 on what turned out to be the final play of the first half, getting nothing from a drive that should have at least resulted in three points.

The Virginia defensive front stood up to the vaunted Carolina rushing tandem of Williams and Michael Carter, who had each come in averaging 100+ yards per game, and ended up with Williams gaining 54 yards on 13 carries, and Carter going for 64 yards on nine carries, as the Tar Heels ended up with a net 93 yards after accounting for sack yardage.

Brown had a monster game in the loss, catching 11 balls on 13 targets for 240 yards and three TDs.

He had that game, Howell had four TDs and five incomplete passes, and that team lost.