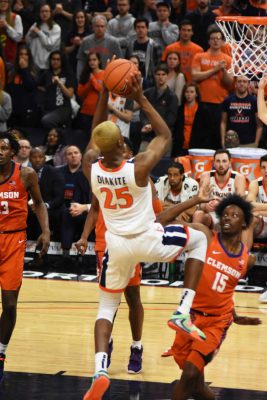 Virginia led by 12 at halftime, but of course, it wasn’t going to be easy.

Clemson rallied to cut the margin to two in the final minutes, and the Cavaliers had to get stops and then close the game out at the foul line in a 51-44 win on Wednesday.

A pair of threes from Braxton Key, who finished with 19 points, were crucial down the stretch. The first, with 4:50 to go, made it 39-34 Virginia.

The second, at the 1:28 mark, would be the backbreaker for the Tigers, who had again cut the margin to three, before the Key three pushed the margin to 45-39.

Kihei Clark scored just one, but had 10 assists in 37 minutes.