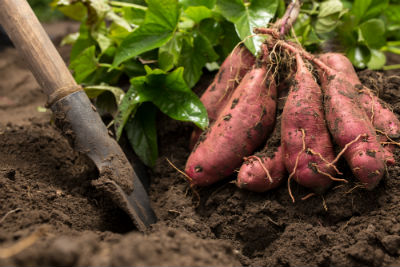 Virginians’ appetite for sweet potatoes is increasing, and local growers are harvesting an ample supply to meet consumers’ holiday needs.

According to the 2017 U.S. Census of Agriculture, 261 Virginia farms produced sweet potatoes for fresh market consumption, more than double the 120 farms that grew them in 2012. Harvested acreage also has increased, from132 acres in 2012 to 223 acres in 2017.

“Sweet potatoes are getting more market share everywhere, and consumers are demanding them more,” Flanagan said. “As the market grows, and we see the merits of going direct-to-consumer over wholesale, you need to come up with ways to extend your season and extend your cash flow. And sweet potatoes continue to grow in popularity, period.”

Cultivating 2 acres of sweet potatoes on his farm, Flanagan said he produced a high-quality crop this year despite seeing slightly diminished yields due to drought conditions in July. With business typically picking up before Thanksgiving, he expects to start selling Bonita and Covington varieties next week.

Flanagan, who also is a Virginia Cooperative Extension agent, noted some growers in Virginia Beach and on Virginia’s Eastern Shore saw “less-than-average” harvests due to dry conditions.

At Hoot Owl Hollow Farm in Amelia County, Kenney Barnard said he produced a “very good crop” and was “lucky” to avoid damaging weather this summer. He began selling Orleans sweet potatoes at his farm in mid-October, and said sales were good so far.

Cliff Slade, who grows 5 acres of Bonita, Covington and other heirloom varieties at Slade Farms in Surry County, said he had one of his best-ever harvests this year.

Despite hot and dry conditions causing some of his crop to be misshapen, Slade said sales have been brisk. He noted that if sales continue at their current pace, he will likely be sold out by Thanksgiving.

“The main thing now is to keep them in a good condition to sell,” Slade said. “But the quality of the sweet potatoes I have is great, the yield was great, and the taste is awesome—just as good as they’ve ever been. I’ll take this kind of year anytime you want to give it to me.”