Virginia coach Tony Bennett, who has guided the Cavaliers to a 28-2 overall regular-season record that includes an ACC-record 17-1 conference mark, has been named the winner of the Henry Iba Award, given annually by the U.S. Basketball Writers Association to the national coach of the year. The Cavaliers added a 29th win today in the ACC Tournament quarterfinal vs. Louisville. 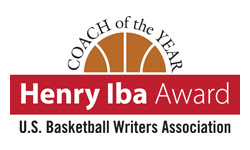 This season, Virginia was picked sixth in the ACC in the preseason and was unranked in the national preseason polls. But under Bennett, the Cavaliers nearly swept their conference schedule while earning a third outright ACC regular-sesason title in the last five seasons, along with the program’s first No. 1 ranking since 1982. Virginia became only the fourth team in the Top-25 era (1990-present) to earn a No. 1 ranking after being unranked in the preseason (Kansas, 1990; Syracuse, 2010; and Baylor, 2017).

Bennett will receive the Henry Iba Award at the College Basketball Awards dinner April 9 at the Missouri Athletic Club in St. Louis, which has partnered with the USBWA on the event. Other awards to be presented that night are the Oscar Robertson Trophy for national player of the year and the Wayman Tisdale Award for national freshman player of the year. In addition, former Missouri and Hall of Fame coach Norm Stewart and retired referee Ed Hightower each will receive lifetime achievement awards. Reservations to the dinner are now available to MAC members by calling 314-539-4470 and are open to the public through collegebasketballawards.eventbrite.com.

The Henry Iba Award is named in honor of the legendary coaching great at Oklahoma A&M (now Oklahoma State) who won two NCAA championships and two gold medals and one silver as coach of the U S. Olympic teams. The award is voted on by the entire membership of the USBWA.