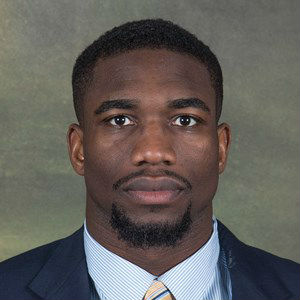 Virginia Football alum Clint Sintim is coming home, after being named the defensive line coach at his alma mater on Saturday.

Sintim will replace Vic So’oto, who resigned earlier this week to take a job on the staff at Southern California.

Sintim, a 2009 UVA alum, returns to Grounds after spending the last three seasons as the linebackers/defensive ends coach for former Virginia assistant Danny Rocco at Delaware.

Prior to that, Sintim coached for Rocco at Richmond in the same capacity during the 2015 and 2016 seasons.

“When we elevated Vic So’oto several years ago to be the defensive line coach, I thought he was a rising star,” Virginia coach Bronco Mendenhall said. “In naming Clint Sintim to that same position, I think we have identified another rising star in our profession and certainly someone who Virginia football fans are well-acquainted with. I love Clint’s passion for his alma mater and desire to want to match the goals and standards we have worked to establish at Virginia to teach and develop young men.

“Clint was rated a three-star recruit in high school, had an amazing college career, and was a second-round NFL draft selection. That shows me his determination to compete and succeed. He is an excellent communicator, a strong listener and relates and builds excellent relationships with his players and recruits. The positions he coached exhibited strong fundamentals and position mastery. He matched all of my selection principles,” Mendenhall said.

Sintim, a native of Woodbridge, where he was an an all-state performer at Gar-Field High School, was a four-year letter-winner at Virginia and served as a team captain as a senior in 2008. He was a second-team All-ACC selection and received All-America honors from Phil Steele and Pro Football Weekly that season.

He finished his UVA career with 245 tackles, including 29 sacks and 46 tackles for loss, while playing in 49 games. His sack total ranks as the second highest in UVA history, and his tackles for loss number is tied for the third most by a Cavalier.

After playing in the 2009 Senior Bowl, Sintim was a second-round NFL Draft selection by the New York Giants. He played in both the 2009 and 2010 seasons before a knee injury sidelined him for the 2011 and 2012 campaigns. He announced his retirement as a player in 2013. Sintim’s NFL career included a Super Bowl (XLVI) championship (2011 season) when the Giants defeated the New England Patriots 21-17 in Indianapolis.

“Virginia has a special place in my heart, and I am beyond humbled to come back to UVA to be a part of Coach Mendenhall’s staff,” Sintim said. “I have watched Coach and his staff take Virginia from a 2-10 record to competing in the Orange Bowl in only a few years. I am excited to play a role in helping this team continue to build and put Virginia on a national stage.”