Virginia, absent someone stepping up, is on the brink

Front Page » Sports » Sports1 » Virginia, absent someone stepping up, is on the brink 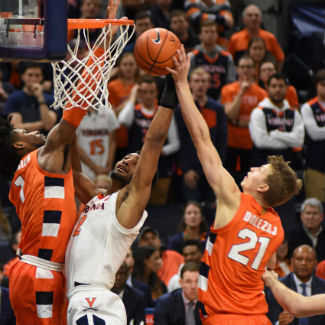 A cast on his wrist isn’t the only impediment for Braxton Key getting to the hole
as the Cavs managed to shoot only 31 percent from the field in a loss to Syracuse. Photo by Dan Grogan.

Start of the week, Virginia was still trying to find an identity, but it was 3-0 in the ACC, with games against a couple of bottom-feeders.

Who feasted on the overmatched Cavaliers.

The uninspired 60-53 loss at Boston College on Tuesday was followed up by an ineffectual 63-55 home overtime loss to Syracuse on Saturday.

When the week started, KenPom.com was projecting UVA at 14-6 in the ACC and 22-8 overall heading into the ACC Tournament.

Suddenly, the season is on the brink.

What happened Saturday was more of the same for Virginia, which surprisingly hasn’t seemed to figure out the little things, like who stops opposing teams’ runs, who takes the big shots, who steps up, basically, when somebody needs to step up.

“You can look at a lot of things,” UVA coach Tony Bennett said. “We had a free-throw violation that took a point off the board. We missed some free throws, we didn’t get back. I always tell our guys, it’s a fine line, and all those little things matter, whether you don’t get a rebound that is in front of you. You can’t control missing a shot, you have to take shots and shoot them.

“There are certain things you can’t control, and that is the message. Learn from it, try to control what you can control and don’t hang your head, but don’t think this is a fluke. Look at it for what it is. We have to get better, and we have to stick together. It’s easy to divide the house, but you have to be able to win together and lose together.”

As had been the case in the loss at BC, it seemed for a time that Virginia, after a long slumber, had taken control.

They were only in it because Syracuse only made three of their last 17 from the field.

Virginia actually had the ball in the closing seconds with the chance to close it out, but Kihei Clark missed an open three with six seconds to go, and the Cavaliers couldn’t track down the rebound.

Syracuse then made six of their seven shots in the OT, five of the makes being threes.

“I thought we just relaxed. And that’s not a coaching mistake, that comes from us, the players,” senior Mamadi Diakite said.

“I know we are young, but we just have to know that at that point in the game, with the home game, we have an advantage, and we need to take that advantage and use it. We weren’t smart enough to do that, we weren’t helping each other defensively, we weren’t doing what we were doing before the overtime.”

At some point, youth, inexperience, all the talk about guys playing out of position, they’re excuses, not reasons.

Somebody, actually, multiple somebodies, need to step up.

“We are going to have to learn and move on and get better,” Diakite said. “We have another large-caliber game coming up. We are going there to Florida. If we play the same way we did today, it will not be good for us. What I’m hearing from that is, we as players have to be coaches, we have to be leaders.

“The coaches can do whatever they can, but if at the end of the day the players are not stepping up and doing what they are supposed to do, it’s not going to happen. So we have to do it all together, unity.”