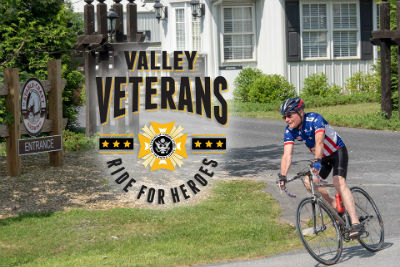 District 11 of the Virginia Veterans of Foreign Wars  is sponsoring a charity bicycle ride, the Valley Veterans Ride for Heroes on Saturday, Sept. 7, starting and finishing at Stable Craft Brewing in Waynesboro.

This event will benefit combat veterans and their families, as well as showing support for the sacrifices and commitment of the U.S. military.

The fundraiser benefits Boulder Crest Retreat, which is a therapeutic and wellness center for combat veterans and their families dealing with physical wounds and mental trauma of their war experiences located in Bluemont.

The ride has three routes, a 26-, 43-, and 63-mile metric century. The routes pass through beautiful rolling farm land and countryside with views of the Allegheny and Blue Ridge Mountains.

There are five rest stops/aid stations on the 63-mile route, each with a theme from American military history, giving the rider an opportunity to ride through history. Themes include the American Revolution, American Civil War, WWII/Omaha Beach landings, Battle of Midway, and the Berlin Airlift & American Air Power.

Registration and packet pickup is 7-8am, at Stable Craft Brewing. Opening ceremonies will be at 8 am.

The start/finish area at Stable Craft Brewing will also feature military themed exhibits and vehicles representing WWII, Korean War, and Vietnam open to the general public.  A DJ and the blues band “41 North” will add to the festivities.  Our veterans partnered with Stable Craft Brewing to brew a special craft beer “Tour of Duty” that will be unveiled as the riders finish up. As veteran Al Scott said, “This is a special beer by veterans for veterans.”

VFW District Commander Melissa Patrick believes that after 18 years of non-stop war wearing on the all-volunteer force, which is drawn from a very small percentage of the population and requires our servicemembers to do numerous deployments, there is a critical need for the services that Boulder Crest Retreat provides to our combat veterans and their families.

“While out and about recruiting and talking to veterans, I am struck by the number of veterans from recent conflicts who clearly have residual issues from their time in service,” Patrick said.