Versatile Noah Taylor: Building block for the UVA defense in 2020

You saw the play that best shows off the versatility of UVA linebacker Noah Taylor at least 25 times this spring on YouTube trying to account for no sports.

Virginia Tech faced a third-and-19 from its own 46, inside of five minutes to go, game tied at 30.

Taylor, a 6’5”, then 215-pound outside linebacker, had already registered a sack in the game, but on third-and-long, the defensive call had him dropping back in coverage, in the process catching Hokies QB Hendon Hooker by apparent surprise.

Hooker thought he had freshman wideout Tayvion Robinson open in the vicinity of the first-down marker, but Taylor, who had been in coverage on slot receiver Tre Turner, before recognizing where Hooker was going with the ball, broke off from Turner and made a twisting interception at the Virginia 35.

The interception helped set up the go-ahead score, a 48-yard Brian Delaney field goal with 1:23 left, in what turned into a 39-30 UVA win that broke the program’s 15-year losing streak to its in-state rival.

“We started to drop Noah more at the end of last year, just due to the personnel that we lost. We lost a lot of DBs at the end of the year, and so, we kind of had to put Noah in that position, to play a little bit more DB. What we found in doing that is that we could probably do just as much of that this year. I mean, he’s probably our best pass rusher at the same time. So, you’ve got a guy that can cover really well, and then you got a guy that can, you know, get after the quarterback,” said Kelly Poppinga, the outside linebacker coach and co-defensive coordinator. 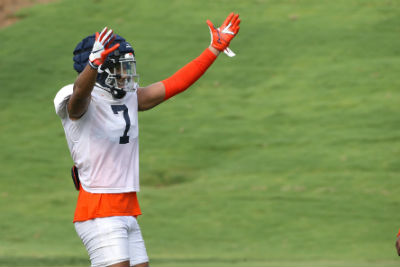 And since you last saw Taylor on YouTube, the junior has added 15 pounds to his frame, arriving at camp at 230, which will only add to his versatility.

“It’s definitely helped a lot, like just being able to play the run. Before I was really just, like, a coverage guy with the pass. But now with that weight, I can really play the run now, which has really elevated my game,” Taylor said.

A three-star prep recruit out of the Bronx, Taylor is an elite Power 5 linebacker now, which he considers a testament to the hard work of the Virginia coaching staff.

Poppinga, for his part, has Taylor – along with Snowden, a 6’7”, 235-pound senior – as the building blocks of the base 3-4 scheme that he and Nick Howell, the safeties coach and co-defensive coordinator, use as the base defense at UVA.

“That’s the beauty of having a 3-4 defense, and then you have two guys that are very multiple on what they can do. Are they both going to blitz? Are they both going to drop? Is one going to blitz? Is one going to drop? There’s a multiplicity of things that we can do there. And so, I would say, you know, based upon what Noah did last year, which Charles has done in the past, a team can’t go into the game and say, Hey, we’re going just at number 14 here, we’re going to number 11 here. I think they’re going to have to scheme it up, you know, play by play. … That’s the beauty of the 3-4 defense, and that’s why I believe we play the scheme that we play, because just the multiplicity of things that we can do with those guys,” Poppinga said.

Coach Pop credits Taylor with working himself into being a building block-type P5 player.

“Just the versatility that he brings, with a guy that can run like he can run, that’s as big and tall as he is, and just how smart he is, as well. I think probably his biggest. or his best strength, is just his intelligence that he has that he can bring on the field. I’m just excited to see him continue to grow and continue to make more plays and continue to, you know, be a leader,” Poppinga said.