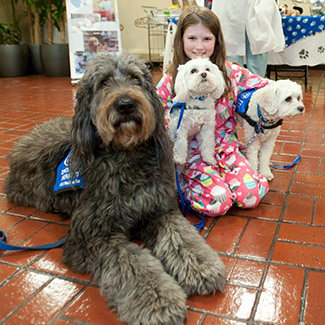 The five-part series takes viewers to 24 countries to meet a wide range of breeds and explore dogs’ evolutionary roles in humankind’s past and present lives. VCU’s Dogs on Call program, which is part of VCU School of Medicine’s Center for Human-Animal Interaction, will be featured in the series premiere that airs at 9 p.m. EST.

The Animal Planet television network is available in more than 93 million homes in the United States and 306 million outside the U.S. In addition to its premiere on Animal Planet, “Dogs: The Untold Story” will air on Discovery Channel International’s factual networks in more than 220 countries and territories.

“We are honored to have our Dogs on Call Program selected to represent the important work of therapy dogs in the healing process,” said Sandra Barker, Ph.D., professor of psychiatry at VCU School of Medicine and Bill Balaban Chair in Human-Animal Interaction at VCU Health.

VCU’s Dogs on Call program brings community volunteers and their certified therapy dogs to visit hospitalized patients throughout VCU Medical Center and at some VCU Health locations including Children’s Hospital of Richmond at VCU’s Brook Road Campus and VCU Health at Stony Point. Dogs on Call teams also participate in special university events such as Paws for Stress during midterm and final exams.

Established at VCU School of Medicine in 2001 and housed in the Department of Psychiatry, the Center for Human-Animal Interaction serves as a hub for interdisciplinary research, service and educational activities related to the human-animal relationship. The center has received widespread coverage from international media outlets for its published academic journal articles documenting scientific evidence of reduced stress among health care professionals after brief interactions with therapy dogs, reduced anxiety and fear in psychiatric patients at hospitals after interactions with therapy dogs and reduced stress in the workplace among people who bring their dogs to work.

“Researchers at VCU’s Center for Human-Animal Interaction have been producing influential data on the health benefits of interacting with companion animals for more than 15 years,” Barker said. “The Discovery Channel series is an opportunity to make our research more widely known and to share the success of our Dogs on Call program with millions of people around the world.”