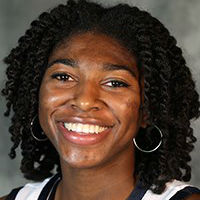 Virginia senior guard Jocelyn Willoughby has been named an honorable mention for the 2020 WBCA NCAA Division I Coaches’ All-America team.

Oregon’s Sabrina Ionescu has been awarded the 2020 Wade Trophy and headlines the 2020 WBCA NCAA Division I Coaches’ All-America team. The prestigious Wade Trophy, regarded as The Heisman of Women’s Basketball, is presented annually to the NCAA Division I Player of the Year by the WBCA.

Willoughby finished the season as the ACC scoring leader at 19.2 points per game, making her just the second player in program history to pace the conference in scoring.

She also ranked 10th in the ACC in rebounding at 7.5 per game and was named All-ACC First Team in votes by the Blue Ribbon Panel and the league’s head coaches.

Willoughby, a third-team CoSIDA Academic All-American, was the first player in program history to be the recipient of the 2019-20 Kay Yow Award as the Atlantic Coast Conference Women’s Basketball Scholar-Athlete of the Year. Willoughby was also named to the 2019-20 All-ACC Academic Team, making her Virginia’s first four-time recipient of that honor.