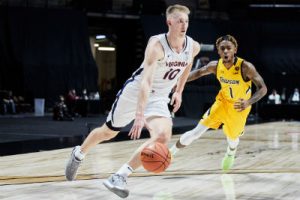 Virginia forward Sam Hauser was one of 50 players named to the watch list for the 2021 John Wooden Award presented by Wendy’s announced Tuesday.

The National Ballot consists of 15 top players who have proven to their universities that they meet or exceed the qualifications of the Wooden Award.

Nearly 1,000 voters will rank in order 10 of those 15 players when voting opens prior to the NCAA Tournament and will allow voters to take into consideration performance during early round games. The Wooden Award All American Team™ will be announced the week of the “Elite Eight” round of the NCAA Tournament.

The winner of the 2021 John R. Wooden Award will be presented by Wendy’s following the NCAA Tournament in April.