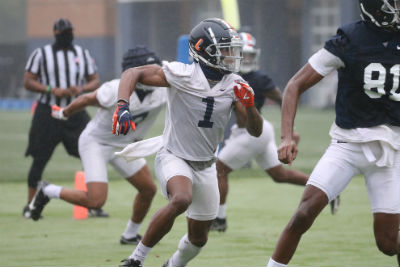 Field corner, in college football, is the toughest position to play in the game aside from cornerback, according to UVA redshirt senior safety De’Vante Cross, who ought to know, since Cross started his college career at quarterback, before getting time at wideout and corner before settling in as a free safety last season.

The ultimate cross-trained guy in a program that emphasizes the development of multiple skill sets, Cross offered high praise for secondary-mate Nick Grant, a senior who moved over to field corner after UVA lost the ubertalented Bryce Hall midseason last year.

Grant started all 14 games for the ‘Hoos in 2019, getting time at boundary corner and then field corner, and led the team in passes defensed (8) while recording 51 tackles in his first season in the starting lineup.

Playing opposite Hall, in a sort of weird way, helped get him ready to move across the line of scrimmage when Hall went down.

With Hall, a 2020 NFL Draft pick, on the field, opponents designed their offensive game plans around going at Grant’s side of the field, by the lesser of two evils theory.

“You can’t be fireproof unless you’re fire tested. So as a matter of being in the fire, really in the action, you can’t know what your weaknesses are until something is tested,” Grant said.

Grant explained why it is that field corner is so tough.

“I would say because offenses are designed to go to where the green grass is, and naturally, to the field, there’s the most green grass, and the most responsibilities,” Grant said.

To dive a little more into it, it’s a bit of a quirk of college football and its wider hashmarks – which are 10.75 feet wider, to be exact, than the hashmarks on an NFL field.

The field structure forces defenses to cheat their coverages to the boundary side, often leaving the field corner without much in the way of help in pass coverage from linebackers and safeties.

“You have the entire route tree to cover. There’s not necessarily any restrictions on what route a receiver could run,” Grant said. “You could put the entire formation in the boundary, leave one-on-one to the field with no help. It is a matter of being tough being mentally tough, being physically tough, and being able to go out there and get the ball.”

Also in a weird way, then, that Grant was able to get the second half of 2019 with Hall out of the mix to grow into the field-corner role was a benefit for him heading into 2020.