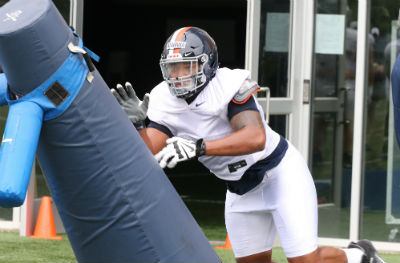 “Number one, I’m really glad they’re both here. And number two, I think it was yesterday, we were walking on the field, and they were talking about the volume of defense, the amount of learning, and they are adjusting. They’re both capable. They’re both bright, and they’re really good fits with us,” Virginia coach Bronco Mendenhall said.

Both Amos and Atariwa, both NFL prospects, decided to transfer ahead of the decision by JMU, an FCS power, to shutter its fall season with an eye to trying to play with the rest of FCS in the spring.

The pair, both grad transfers, are eligible to play for Virginia this fall, and Mendenhall said Friday that both are already in the rotation at their positions on the UVA defense.

Amos will bolster a secondary that needs to replace Bryce Hall, now in camp with the NFL’s New York Jets.

The Richmond native recorded 57 tackles, two interceptions, broke up five passes and blocked three kicks in 2019 at JMU, which he leaves ranked second on the program’s all-time list with 1,259 career punt return yards, also having returned five punts for touchdowns.

Atariwa appeared in 39 career games for JMU, with 23 career starts. The Sterling native made 52 tackles, 13.0 tackles for loss, 1.5 sacks, one fumble recovery, one forced fumble, a pass breakup and one blocked kick in 2019.

Atariwa figures to get time on a defensive line that is otherwise trending young this fall.

“When you’re considering graduate transfers, most of us, there’s a need immediately, and we had an immediate need at both positions,” Mendenhall said. “They both proven to be capable now. It’s just how fast we can get them up to speed. Good news. There’s four more weeks until we play.”