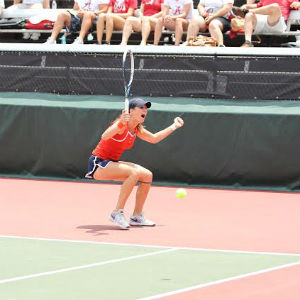 Collins, the overall No. 2 seed in the tournament, fought through the first-set tiebreak, an hour long rain delay and held off a determined Stefani in the second set to clinch her spot in the finals. Stefani was the seventh-seed in the singles championships.

“I started off really hot in the first set and then she gave me a run for my money, very similar to the match I played (Saturday),” Collins said. “That’s what happens in a situation like this when you make it to the semifinals of the national championship. Matches get close and people start doing some different things.

Virginia’s Collins will now face top-seeded Hayley Carter of North Carolina at 1 p.m. ET on Monday. Carter advanced with a 1-6, 7-5, 6-2 win over Miami’s Sinead Lohan, who was seeded eighth in the tournament.

Collins and Carter have played each other three times this season with Carter claiming the win in the regular-season dual match. The match between the nation’s top two players went unfinished in the ACC Tournament semifinals and in the NCAA Tournament Round of 16 meetings as the overall match was clinched before the duo completed their individual contest.

The second set appeared to be firmly in hand for Collins as she moved out to a 4-1 lead in the second set when rain forced a delay in the match at 15-15 in the sixth game.

Following a delay of nearly an hour, the match resumed with Collins claiming the game to take a 5-1 lead in the second set. Stefani fought back, however, winning the next four games to close the gap to 5-4.

Trailing 15-40, Collins fought back to tie the match at deuce before clinching her spot in the championship match with powerful forehand return on a Stefani serve to win the second set 6-4.

Collins will play for the NCAA Women’s Tennis Singles championship for the second time in three seasons. She claimed the 2014 NCAA championship as a sophomore and advanced to the quarterfinals of the tournament in 2015.