UVA vs. Clemson: Five things to watch for

There will be an estimated 19,000 fans in Death Valley for Saturday’s UVA at #1 Clemson game in prime time on the ACC Network.

Neither you nor I will be among them.

I was a couple of hours up I-85, in Charlotte, in December, to watch in person the last matchup between the two.

That one, also in prime time, turned into a 62-17 Clemson win, and it wasn’t that close – 31-7 Tigers at the break, and it was so over that Chase Brice, now the starting QB at Duke, threw for 106 yards in mop-up duty.

The only touch any of us media types have had with the UVA program since mid-March has been via Zoom, but as someone who has been on and monitored all of those talks the past six-plus months, I can say one thing: the UVA kids have been looking forward to this one.

Which isn’t to say they’re going to go out and shock the world, but they’ve had this one circled.

Just saying, tune in. Clemson is going to get UVA’s best shot, whatever that is.

The five things to watch for: UVA vs. Clemson 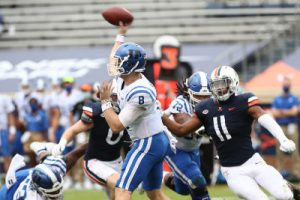 Trevor Lawrence threw for 302 yards on 16-of-22 passing in the ACC title game win in December.

A lot of that was soft coverage on the edges, which was all Virginia could do, given how banged up it was in the secondary.

The secondary isn’t banged up heading into this one, so if Nick Howell and Kelly Poppinga feel comfortable trying to engage the wideouts at the line, that can give the front a chance to get pressure on Lawrence with edge ‘backers Charles Snowden and Noah Taylor.

The ‘Hoos registered five sacks in the 38-20 win over Duke last week, and the constant pressure on Brice helped force him into throwing four picks, as the Blue Devils turned the ball over seven times on the day all told.

Clemson isn’t going to turn the ball over seven times, but one or two, plus success from the Virginia D on third downs to get off the field, is doable.

Virginia ran for 188 yards in the win over Duke last week, and it really seemed to wear on the Duke defense in the second half, particularly in the fourth quarter.

If the ‘Hoos can establish the run early, extend some drives, get the Clemson defenders on their heels a bit, this is a defense that hasn’t been tested in the second half yet.

Virginia can’t out-talent Clemson – maybe only Alabama can in 2020.

Can Clemson be out-toughed?

If it can, it would be by the most experienced O line in the ACC. 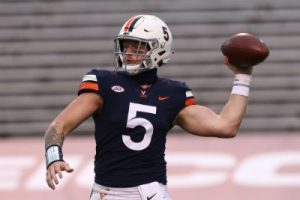 BA had a nice fourth quarter – 8-of-9, 144 yards, two TDs – in his first college start, and Armstrong kept the chains moving with his feet, running for 47 yards on 10 totes.

Offensive coordinator Robert Anae had been saying all preseason that the offense would look a lot like it did when Bryce Perkins was the man, and largely, it did.

Armstrong will need to be on point from the get-go if the offense is going to have a chance.

Bronco Mendenhall addressed this in his Monday presser. He doesn’t like night road games anyway, but with the public health situation this year, Saturday is going to be a really long day for the team in the hotel, sleeping in, eating boxed breakfast, boxed lunch, boxed early dinner, before heading to the stadium.

Mendenhall said the saving grace is that at least there’s other college football to watch on TV during the day to give guys something to do to pass the time.

As mentioned, there will be 19,000 fans in attendance for this one, which, OK, it’s more than the thousand that were in Scott Stadium last weekend, but, Death Valley can accommodate 81,500 on a normal football Saturday.

This has to be advantage: Virginia.