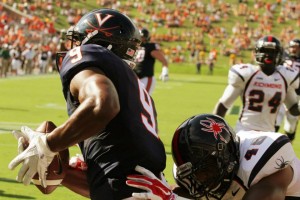 Strauss threw for 266 yards on 24-of-35 passing, but threw two interceptions and lost a third-quarter fumble that Eli Harold returned 22 yards for a touchdown. Rocco was 5-for-11 passing for 97 yards and scored a touchdown on a 6-yard scramble.

Virginia (1-1) also shuttled in multiple quarterbacks, with starter Greyson Lambert 13-of-15 for 102 yards and a touchdown, Matt Johns 4-of-7 for 65 yards, a touchdown and interception, and last year’s starter, David Watford, completing his only pass attempt in two series, one of which resulted in a late score.

Richmond (1-1) outgained Virginia with 432 yards of total offense to the Cavs’ 330 yards, but ur only scored one touchdown in three red-zone opportunities, and also lost a fumble inside the 5 yard line in the final minute of the first half at a critical juncture, down 14-3 and threatening to make it a one-score game at the break.

The ‘Hoos scored on their first possession of the second half, on a Taquan Mizzell 3-yard rush that was set up by a 45-yard pass from Johns to Darius Jennings. After the teams traded field goals, broke the game open on the Strauss fumble on a sack-and-strip by Max Valles, then scooped in stride by Harold, who ran untouched into the end zone for the TD and a 31-6 lead.

The Rocco scamper cut the UVA lead to 31-13, but Virginia padded the margin in the fourth on a Lambert 29-yard touchdown pass to Canaan Severin and a 1-yard TD run by Daniel Hamm that closed out the scoring with 1:48 left.

Virginia continues its season-opening homestand with a must-win ACC opener against Louisville next Saturday at 12:30 p.m.