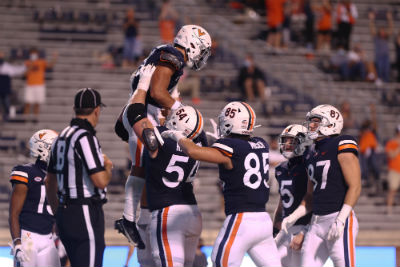 Duke had the lead, the ball in scoring territory, Virginia seemed to be sucking wind, and it was getting late.

An inexplicably poorly-timed trick play led to a Brenton Nelson interception at the UVA 6, and Brennan Armstrong, 16-of-36 passing with two INTs to this point, led the ‘Hoos on a 94-yard scoring drive that put Virginia ahead to stay early in the fourth quarter, propelling a 38-20 Cavalanche on Saturday.

It was the season opener for Virginia, and it showed, and not just in the sloppy play – Tavares Kelly fumbled the opening kickoff, leading to a Duke field goal – and the two Armstrong picks.

Conditioning seemed to be an issue as the game wore on. Wideout Terrell Jana had to be helped off the field with cramps after stretching to convert a third-and-five late in the third quarter, and on the next Duke drive, the Blue Devils, up 20-17, were gashing the Virginia defense, getting a 17-yard run from Mataeo Jackson on the first play of the drive, and then a 24-yard run from Deon Jackson that put Duke at the UVA 22 with a first down just outside the red zone.

On the next play, Jalon Calhoun got the ball on a lateral from quarterback Chase Brice, on what was designed to be a double-pass.

The play blew up from the start, with Calhoun muffing the lateral, throwing off the timing of the play, and he threw under pressure late over the middle in the direction of Nelson, who made the easy interception to stop the scoring drive.

Armstrong would go 8-for-9 for 144 yards and the two TDs in the fourth quarter, to finish the day 24-for-45 for 269 yards, two touchdowns, two interceptions, with 47 yards on 10 carries and a rushing TD, in his first career start.

Davis had 101 yards on four catches.

Tailback Wayne Taulapapa had 95 yards and two TDs on 16 carries.

The UVA defense harassed Brice into a four-INT day and an eventual benching in the fourth quarter.

JMU grad transfer safety D’Angelos Amos had seven tackles and had one of the five UVA INTs.