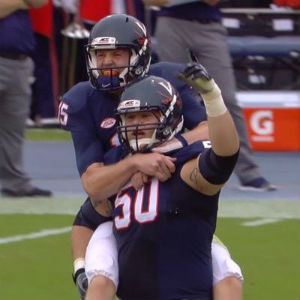 Johns (Sr., Chalfont, Pa.) finished with 2,810 passing yards in 2015, ranking No. 4 in the ACC. The 2,810 passing yards also rank No. 3 all-time in the UVA annals for a season. His 20 touchdown passes ranked No. 3 in the ACC and tie Aaron Brooks (1997) and Dan Ellis (1999) for No. 4 in the UVA record books for touchdown passes in a season. Johns averaged 234.2 passing yards per game, which ranks No. 2 all-time in the UVA record books. Johns graduated with a degree in economics in May and is now doing his graduate work in higher education from the Curry School.

The Wuerffel Trophy, known as “College Football’s Premier Award for Community Service,” is presented annually by the All Sports Association in Fort Walton Beach, Fla. Named after 1996 Heisman Trophy winning quarterback Danny Wuerffel from the University of Florida, the Wuerffel Trophy is awarded to the FBS player that best combines exemplary community service with athletic and academic achievement.

The 2016 Allstate AFCA Good Works Team is heralded as one of the most coveted off-the-field honors in college football. This year marks the 25th anniversary of the award, which was established in 1992 to recognize a select group of college football players who have made a commitment to service and enriching the lives of others.

In order to meet the criteria set forth by Allstate and the AFCA, each player must be actively involved with a charitable organization or service group while maintaining a strong academic standing.