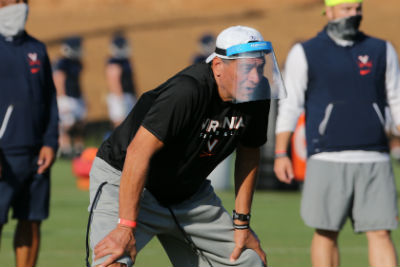 In two of his appearances, Armstrong appeared in one series while Perkins was sidelined for a medical evaluation. On both occasions he led UVA on a scoring drive, which included a field goal against Louisville and a touchdown at Georgia Tech.

Armstrong had to win a spirited battle for the QB1 job with Mississippi State grad transfer Keytaon Thompson, who joined the program in May with two years of eligibility remaining.

“Keytaon pushed that thing a couple of weeks, and I think he garnered respect from the team in the process,” Anae said of Thompson, a 6’4”, 225-pounder who was a four-star recruit coming out of high school, and in his limited action has shown ability to move the ball with his feet.

Thompson was the breakout performer at the 2017 Taxslayer Bowl, basically out-Lamar Jacksoning the actual Lamar Jackson in a 31-27 Mississippi State win over the future NFL MVP’s Louisville squad.

Thompson ran for 147 yards and three touchdowns and completed 11-of-20 passes for 127 yards in the win.

He fell into Virginia’s lap after enduring three coaching changes in his three-plus years in Starkville.

Anae hinted that it might be hard to keep the elite athleticism of Thompson off the field for long.

“From our standpoint, it would not be a good idea if one of our better athletes was standing next to me with a clipboard, so we’re looking for opportunities to get him on the field and to get him involved,” Anae said.

You can imagine maybe some wildcat plays involving Thompson early on, at the least, but at the same time, Anae is high on Armstrong, who has been working toward being QB1 in Charlottesville since enrolling early at UVA in January 2018.

“He can make all the throws, you name a throw in the program, you name a throw in the game, and he can make it,” Anae said. “Emotionally, there’s a lot to cover, a lot that we’ve got to develop and grow along those lines. But, dang, I think the players will respect how competitive he is, especially in the offseason and those areas that, you know, you earn the respect of your team with how you how you perform in the weight room and in the conditioning program, and, hey, I can’t say enough on him as a young quarterback.”