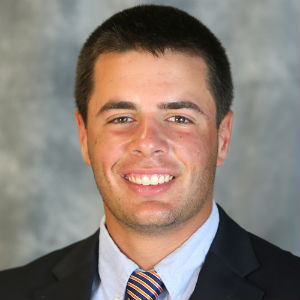 UVA junior golfer Derek Bard (New Hartford, N.Y.) has been named a semifinalist for the 2016 Jack Nicklaus National Player of the Year Award. He is one of 30 golfers on the Division I level being considered for the award. The Nicklaus Award recognizes the top players at the Division I, II, III, NAIA and NJCAA levels.

Bard currently leads UVA with a 71.25 stroke average. He has topped the team in scoring in six of 11 events this season. Bard won the U.S. Collegiate Championship in October and has posted six top-10 finishes this year.

He participated in the Masters as one of six amateurs in the field and finished at +9, 153 which was third best among amateurs. He was the only active NCAA player in the field.

Earlier this month he was named to the United States’ 10-man roster for this summer’s Palmer Cup competition. Bard is the first Virginia golfer selected for the Arnold Palmer Cup.

The Division I finalists for the award will be named May 25. Nicklaus Award recipients will be announced June 2 with the honor presented by Jack Nicklaus at a ceremony during the final round of the Memorial Tournament presented by Nationwide Insurance at Muirfield Village Golf Club.

In addition to receiving the Jack Nicklaus National Player of the Year Award, the five recipients will compete in the Barbasol Shootout for an exemption into the PGA TOUR’s Barbasol Championship, held July 14-17, at the Robert Trent Jones Golf Trail at Grand National in Opelika, Alabama. The Barbasol Shootout will be heldSaturday, June 4 at the storied Scioto Country Club in Columbus, Ohio – the same club where Jack Nicklaus learned the game of golf as a young boy.

Bard is one of four ACC men’s golfers to be named a semifinalist, joining Hank Lebioda (Florida State), Robin Sciot-Siegrist (Louisville) and Will Zalatoris (Wake Forest).